Greg Russell - Inclined to Be Red 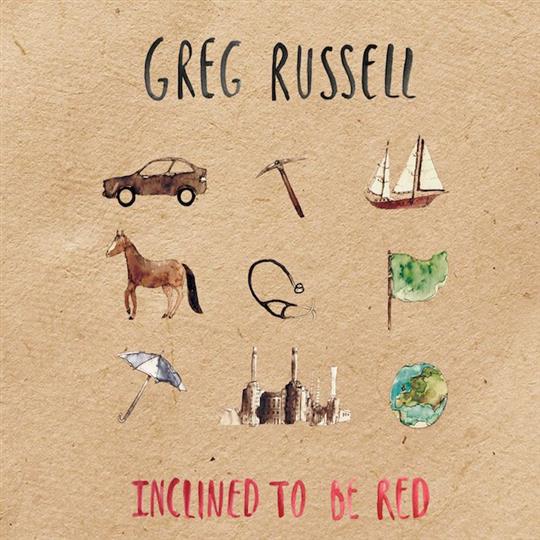 Inclined to Be Red is Greg Russell’s first solo album. He is joined by just the two guest musicians, Archie Churchill-Moss (Moore Moss Rutter) on melodeon and Tim Yates (Blackbeard’s Tea Party) on double bass. Their contribution enhances Russell’s singing and guitar and banjo playing without ever overwhelming it.

The first thing that strikes you about Greg Russell is the energy and passion he invests in the songs he chooses to sing. His recent involvement with Shake the Chains and The Transports has obviously nurtured this interest in political song.

Most of the songs on this album are socio-political songs - hence the passion. However, these are not shouty protest songs, but songs which explore issues in depth, documenting a situation people need to be aware of so that changes can be made.

Some are based on historical fact. The album opens with E.G.A, which tells the story of Elizabeth Garrett Anderson, the first woman to qualify as a doctor in Britain. Road to Dorchester describes the plight of the Tolpuddle Martyrs and Russell’s gutsy, passionate playing is particularly in evidence here. The song has a timeless quality as there always have been and always will be causes worth fighting for.

Other songs imagine a situation that could have happened. Willie ’Ole Lad imagines a situation where a young woman wants to marry a man who works in the worst part of a mill. Her father hopes for better things. This song is the only a cappella track on the album. It is a beautiful rendition of a very poignant song.

Other major timeless themes include the futility of war, as expressed in the song Farewell. The contemporary global issue of the destruction of many natural habitats is aired in Race to Burn. In this song particularly Greg Russell also shows himself to be a gifted songwriter.

Russell often writes from his own experience. This is particularly evident in the final track on the album, Storylines, which deals with the place of politics in music. Apparently he was challenged in a folk club about his political songs by someone who believed that politics had no place in folk music. The entire point of the album is summed up here.

Inclined to Be Red is a well-balanced collection of traditional, contemporary and self-penned songs, many of which will stick with the listener because of their subject matter and the way they are delivered.