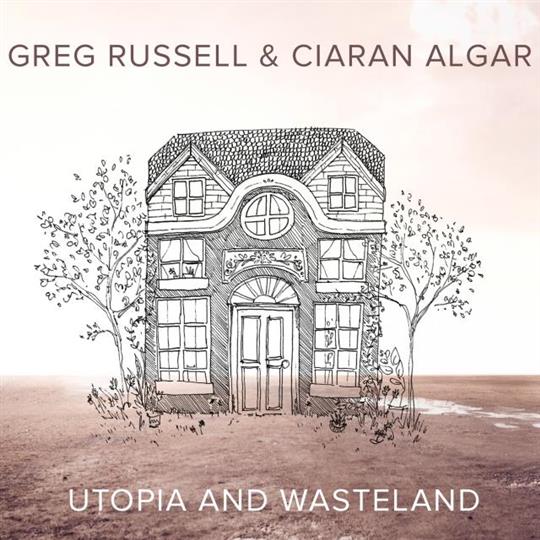 Ever since they won the BBC’s Young Folk Award on the back of their debut release The Queen’s Lover, the talents of Greg Russell and Ciaran Algar have never been in doubt. From such an impressive start, their capacity to innovate and astound with each new release has seemed to build and build. Now onto their fourth album, the question is whether the duo continue on that trajectory or begin to settle into something approaching a pleasing but comfortable formula. The answer is that Utopia and Wasteland continues to set the bar even higher.

Production shifts up a notch, courtesy of Mark Tucker who also adds bass and percussion, but the biggest change with this album is the strong focus on self-penned material. In contrast to the interpretations of traditional songs and well-chosen covers that provided the bulk of material for previous albums, nine of the eleven tracks here are original compositions.

The emphasis on original material has allowed the duo to explore some contemporary issues yet bring their instinctive appreciation of traditional music, Russell’s rich distinctive vocals and Algar’s virtuoso fiddle to create some seriously impressive modern folk songs. Russell has already demonstrated his gift as an immensely talented songwriter (someone who managed to write The Queen’s Lover while bored with revising for A levels, let us not forget). However, perhaps the most striking and moving song here is Algar’s composition We are Leaving, which documents the culture of neglect and indifference that culminated in the Grenfell Tower disaster.

Elsewhere on the album, Line Two is Russell’s take on the HS2 rail project, while Walter reflects on the incredible life of Walter Tull, an English professional footballer who became the first black officer to lead white troops into battle in the First World War and was killed in action at just 29. Algar also brings his talents to bear with a couple of pleasingly inventive tune compositions in Warwick Road and De Gule Huis.

With Utopia and Wasteland Greg Russell and Ciaran Algar once again showcase their incredible talents and demonstrate some superb songwriting into the bargain. An exceptionally strong album, this marks another chapter in the duo’s hugely impressive career to date.