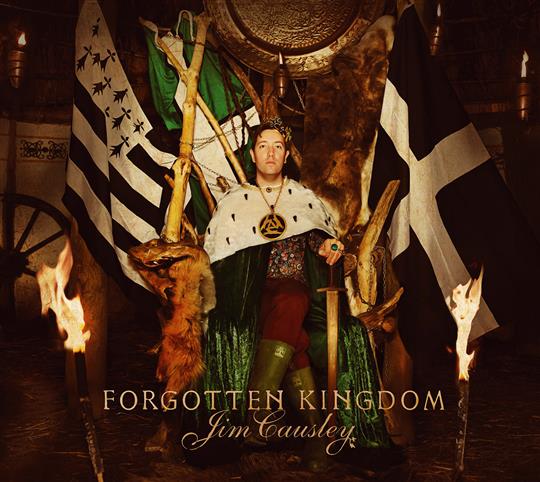 Forgotten Kingdom is an epic album in so many ways - the first thing you will notice is the sumptuous packaging with its shiny booklet and beautiful photos of Exeter Cathedral; then you have 15 self-penned songs. Add to that a list of guest musicians longer than your arm and you have all the ingredients for an exciting creation.

The album covers so many aspects of the Kingdom of Dumnonia, its history and people. In his sleeve notes, Jim Causley laments the fact that the history of the area where he grew up was not taught in school. Although Causley has written the songs himself, they have a very traditional feel to them, and he occasionally uses snippets of traditional songs or tunes in his compositions.

The album is announced with a fanfare and two songs sandwiched together. The Gabbro Bowl is a piece of Neolithic pottery on display in an Exeter Museum. This song is short and sweet and uses Blow the Windy Morning as a chorus. Peninsula Prayer is quite hymn-like with meaty verses and matching harmonies, with Causley being joined by Steve Knightley and Phil Beer of Show of Hands and Dave Lowry, Barry Lister, Tony Addison and Bill Crawford of the Claque. Blow the Windy Morning returns at the end to tie the two songs together.

The mood of the album changes frequently, from the philosophical, contemplative and melancholy to the joyful and celebratory. Back in the Day fits into the former category and includes some unusual instruments: Phillip Henry plays a chaturangui, an Indian version of the slide guitar and Phil Beer pays a laúd, a type of lute originating from Spain.

Rewind (which first appeared on Fruits of the Earth) is beautiful in its simplicity - just vocals accompanied by accordion and guitar. It is a glorious nostalgic wallow, but also emphasises the importance of living in the present. Reigning Men is another melancholy song, accompanied by piano and accordion. Additional vocals are provided by Kathryn Roberts. The song laments the fact that those in authority do not always respect the views and lives of those they govern.

A couple of songs have very familiar first lines which may make the listener expect a traditional song - Banks of the Tale begins “One morning as I was out walking…” and tells a common story in folk song, that of going out to meet one’s true love, who proves to be false. Again, the arrangement is simple, with James Dumbleton’s guitar playing accompanying Causley’s singing. The Road to Combebow begins with a verse from the traditional song The False Knight on the Road. This song is another history lesson, telling of the conversion of the region and naming many of its saints. The fabulous tune is given a sense of history by those two ancient instruments, the hurdy gurdy and the bagpipes (played by Steve Tyler and Katy Marchant).

Choosing favourites from this album is an impossible task, but one particular highlight is Pride of the Moor, a song celebrating tin mining on Dartmoor. The huge sound on this track is again provided by the voices of The Claque and the duo Ninebarrow, joined by Nick Wyke and Becki Driscoll on fiddle, and of course Causley on lead vocals and accordion. This song is already a popular singalong number in his live set and it can only be a matter of time before it appears in singarounds with its rousing chorus.

With so many musicians on the album, it is perhaps fitting that Causley ends the album on his own with a short song called Sea Sick - billed as an “anti-shanty”. Although on one level it could be perceived as a comic play on words, it is again a song of longing for one’s beloved homeland.

Forgotten Kingdom is one of those albums that gives more depth every time you listen to it.