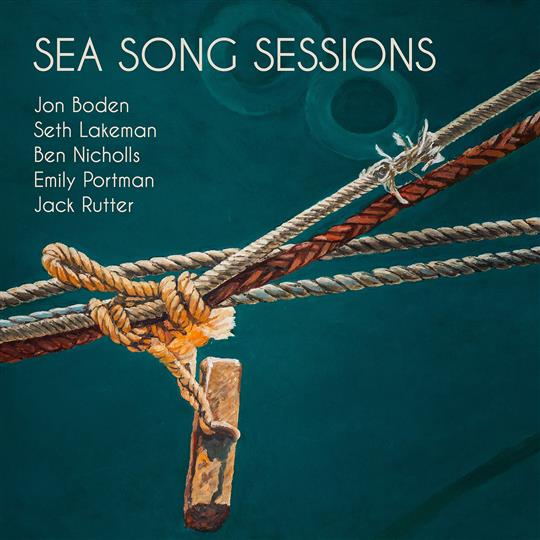 5 of the finest and most accredited British folk musicians come together on Sea Song Sessions for an album of 13 sea-themed songs. The combined forces of Jon Boden, Seth Lakeman, Ben Nicholls, Emily Portman and Jack Rutter would create an unstoppable force no matter what the theme. But in maritime songs and sea shanties, there is no worthier lineup.

The album opens with the band’s full strength uniting behind Lakeman’s vocals on The Rambling Sailor. On The Dreadnought (Bound Away), Rutter sings of the famous ship that crossed the ocean between Liverpool and New York. For the first time we hear the voices of the rest of the band during the chorus added by Rutter to this traditional song.

The gentle pace of Rock ’n’ Row Me Over, led by Portman, demonstrates the many different ways sea shanties can be realised in a modern context. One of the few non-traditional songs on the album is Salvation Army Band Girl by Boden, which fits very comfortably alongside its traditional companions.

Nicholls’ booming and captivating voice leads Jack and the Bear Skin, which tells the humorous story of a hairy sailor returning from the Baltic Sea. The instrumental parts in this track also give it a distinctly Baltic sound.

On The Lady and the Lantern, Lakeman tells the eerie tale of a shipwreck, the death of a baby, and a grieving mother’s spirits haunting the ocean. The closing track, Deep Blue Sea, is led by Boden but features luscious harmonies from the whole band throughout.

The format of the album works perfectly, with different tracks led by each musician. It showcases the wealth of talent possessed by Boden, Lakeman, Nicholls, Portman and Rutter, as well as an eclectic selection of sea songs. If you are looking for a collection of maritime songs, or just a unique collaboration between some of folk music’s best, then look no further than Sea Song Sessions.

Released on Topic Records on 30 September 2022 on CD and digitally. Recorded at Agricultural Audio by Ben Hillier.