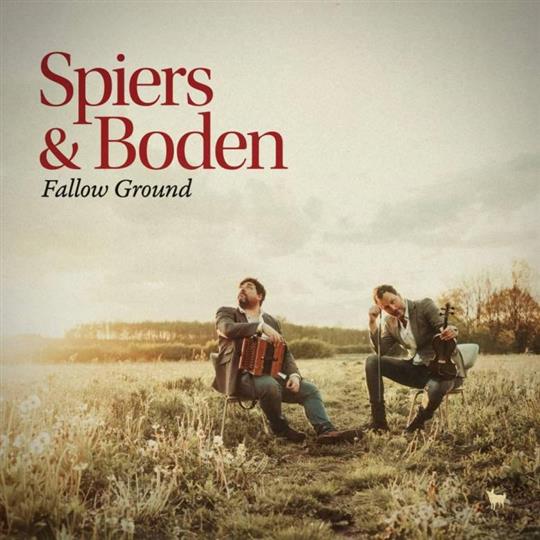 Spiers & Boden are, in many ways, modern trad folk made manifest, and Fallow Ground is a spectacular new chapter from the masters of the genre.

The phrase Fallow Ground itself is an agricultural term used when farmland is left untended for several seasons. This is done to let the land recover and regenerate, with the hope that when it is re-used, the fruit of the earth will be that much higher quality. This terminology perfectly suits the long-overdue return of one the trad scene’s greatest duos.

The scope of this album is broad and exciting, from fresh newly composed tunes (The Fog, Bailey Hill / Wittenham Clumps) to those that date back to the Baroque period (such as Goddesses / Red House, taken from the Dancing Master tunebook dated 1651). There are ditties from Durham and one song of French-Canadian origin. (Yonder Banks and Hind Horn respectively.)

If Canada wasn’t far enough, Bluey Brink is a song of Australian inception that is often performed in a relatively sombre style. Spiers & Boden lend it an almost cheerily piratical air as they embrace the amusing subject - that of an iron-livered boozer always after that stronger hit, with potentially beard-singeing consequences.

Butter and Cheese and All is a genuinely funny story about a gastronomic liaison with a chef that goes awry, and the Ironing Board Hornpipe was named after John Spiers’ own ironing board in the (apparently futile) attempt to encourage him to use it more. (It is not actually played on an ironing board, unfortunately, though perhaps next time? One lives in hope of a kitchen-themed folk band - ’Fig Jamboree’ anyone?)

The tone of the album in general is one of fun and positivity, deliberately so. The pair took it upon themselves to spread some cheer during the second lockdown, and this album is a testament to that. Boden himself has mused that this is perhaps the first of his albums that doesn’t feature a song about death, which could threaten their membership of the English Folk Dance & Song Society.

It almost goes without saying that each tune is performed expertly, both in technical skill and emotional emphasis. When you swim you get wet, and when you listen to Spiers & Boden you get utterly fantastic folk music.