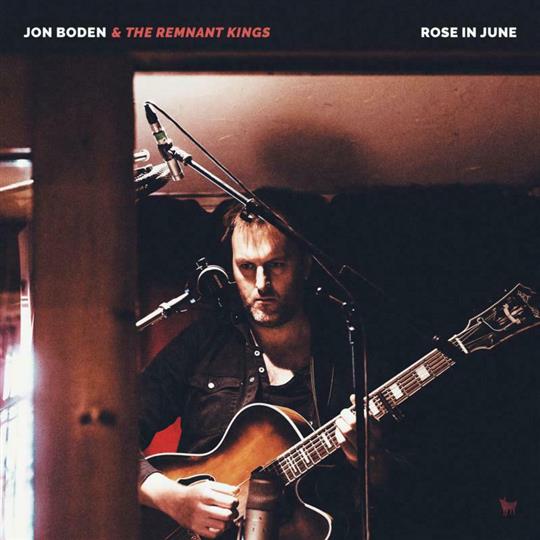 Sometimes you have to look back to move forwards. Rose in June is former Bellowhead singer and fiddle player Jon Boden’s fourth solo album, and sees him revisiting musical touchstones alongside more recent additions to his setlists.

A near-identical 10 piece Remnant Kings backing band to 2017’s Afterglow is in support, but this time the selection of songs and tunes is drawn firmly from the folk idiom, in contrast to Boden’s previous self-penned concept albums.

The title track and opener in itself is enough to reaffirm his trad credentials. A tale of disaster at sea is well worth every one of its 10 minutes, the drama builds gradually as the ensemble come in one by one, Boden’s powers of vocal storytelling undimmed.

Bellowhead fans will likewise enjoy the bold and brassy reworkings of guitar-heavy Roll The Old Chariot Along (All Hang Down) and Sweet Thames Flow Softly, the latter featuring soaring, quasi-orchestral strings and horns set against a thunderous drumbeat.

Equally arresting but altogether more subtle string arrangements are at the heart of Seven Bonnie Gypsies, the richness of the viola and cello bringing a delicate touch to the antique ballad. A decidedly more modern cover of Hounds Of Love provides an opportunity for all four concertina players in the band to get some air in their bellows, with the tremulous vocals a surprisingly good substitute for Kate Bush’s.

Rose in June also features rerecordings of three of Boden’s own compositions from 2009’s Songs From The Floodplain. Beating The Bounds and We Do What We Can fit nicely enough within their new expanded lineups, but Going Down To The Wasteland is the pick of the bunch, given a new sense of eeriness from the falsetto backing vocals and swooping strings.

Long time fans may be slightly disappointed by the large proportion of material on the album previously released elsewhere, or may enjoy hearing old favourites in a new light; the subdued rescoring of Rigs of The Time for string quartet is a case in point.

Regardless, Boden’s return to the traditional and trad-adjacent material on which he built his deserved reputation as a leading light on the folk scene is a welcome one. Both as a singer and bandleader, Rose in June sees him back doing what he does best.

Released on CD and digitally on November 1st and LP on November 22nd 2019 on Hudson Records. Produced by Andy Bell.