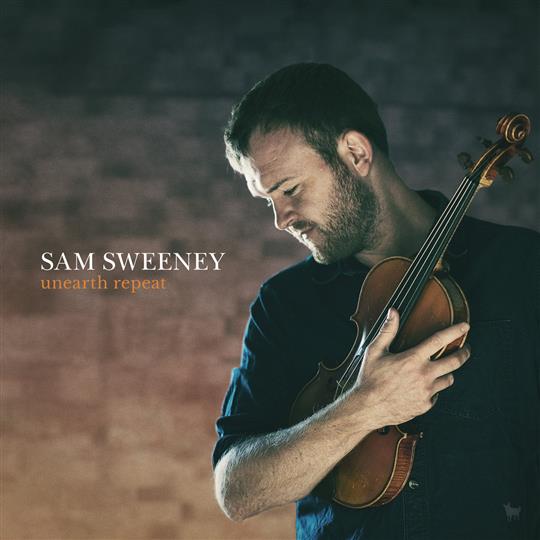 Is there an English folk musician left with more than two degrees of separation from Sam Sweeney? In recent years the former Bellowhead and Kerfuffle fiddler has been in high demand, contributing to albums from a roll call of the scene’s leading lights.

On the strength of Unearth Repeat, it’s easy to see why. After two First World War themed albums, Sweeney’s third release under his own name sees him and a four piece backing band bringing an original and distinctive shine to English traditional dance repertoire, modelled on the work of contemporary folk acts from Scotland and Scandinavia.

The titles of many of the tunes featured will be familiar to seasoned folkies, though the form they appear in might not be. Sweeney is not afraid to chop and change the source material to create the desired effect, grafting part of one traditional tune onto another, switching modes, or being guided more by the shape of a melody than the specific notes as they appear in the tunebooks.

This doing away with the comfortable resolutions that characterise English tunes allows the backing band to use chord progressions borrowed from the vocabulary of modern pop and indie, creating a sense of anticipation and gradual development. The contemporary gloss is enhanced by Louis Campbell’s clean and clear electric guitar chords and chiming counter-melodies.

For all these innovations, Unearth Repeat is not a challenging listen, with Sweeney opting for clarity of tone and carefully weighted emphasis over excessive ornamentation in his fiddle playing. This economical approach allows him to wring excitement out of the simplest tunes, such as The General and Winter 350, or tease the off beat as per The Old Wagon Way and Steppy Downs Road.

Similarly, despite the album being taken at a slow to moderate pace, it doesn’t lack energy. Highway to Warrington and The Old Wagon Way both build up to a vigorous climax, with Jack Rutter’s acoustic guitar the driving force.

On Unearth Repeat, Sam Sweeney and band have achieved the rare feat of creating folk music that is both forward-looking and mature; modern and cosmopolitan in its influences but at the same time undeniably English and anchored in the tradition. A point of departure, both for Sam Sweeney and English folk music.

Released on CD, vinyl and digitally on Hudson Records on March 27 2020. Produced and engineered by Andy Bell.