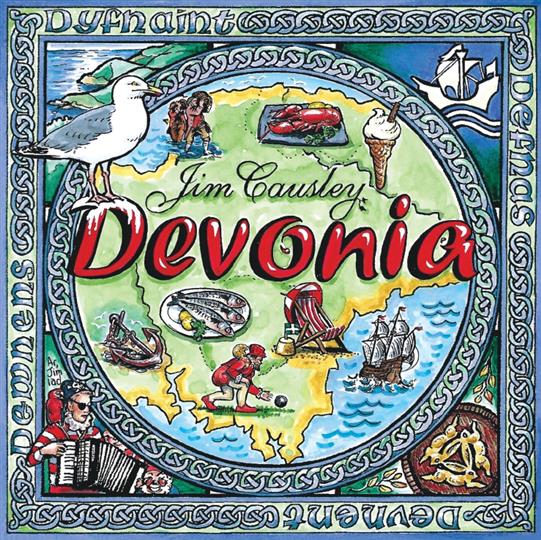 Devonia is the latest element of Jim Causley’s Devon trilogy. A double CD including 40 traditional songs, poems and melodies from his native county, it was recorded, like the previous chapter, with some great West Country folk stars such as Matt Norman and Nick Wyke.

The work has been conceived to include some old favourites, mostly from the Sabine Baring-Gould collection, and some lesser-known songs that were impossible to include in Devonshire Roses.

Many of these pieces have been written or collected during the late Victorian, the Edwardian and the pre-World War I period and have been not heard for more than a century. The connection with Devon is evident from a first look through the titles, many of which have direct references to the county. Not only to the popular Dartmoor area, but also to towns and villages such as Chagford, Dunkeswell, Oxenham, Kingsbridge and Brixham.

Stylistically, this release follows the steps of its predecessor. Causley’s versatile accordions and piano playing, gracefully underpinned by fiddle, mandolin, whistles and brass instruments, effortlessly carries the songs and the funny, dramatic or suggestive images they depict.

As in the previous chapters of the trilogy, there is a sparkling mix of jolly and light-hearted songs, such as Keeper of the Eddystone Light, Bren’ Cheese an’ Zider and Bellever Hunt, and more haunting and lyrical ones. Take for example Oxen Ploughing or The Westernland, the latter closing the album on a high.

Stand out tracks, just to name a few, are One April Morning, a fitting opener for the first disc, the beautifully delivered Cottage Well Thatched with Straw and the Long and enticing Margaret of Oxenham, based on a 1635 detailed report of a supernatural fact that occurred in South Sale.

A generous collection of traditional material to be handed down, a folkie travel guide to Devon and a chance to visit the different corners of the county from a living room, Devonia is a new success for Causley and his unique way of portraying his native county.