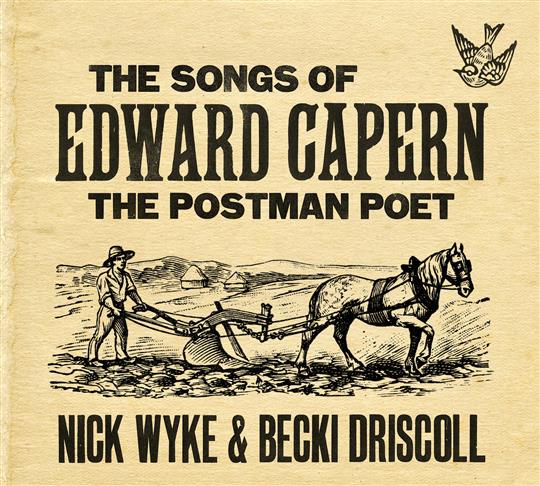 Edward Capern was a Victorian poet, writing in the mid-19th century. The album of “The Postman Poet” is the result of a collaboration between Liz Shakespeare, who wrote a novel of that name based on Capern’s life, and Devon musicians Nick Wyke and Becki Driscoll.

Capern intended for some of his poems to be sung, and as he composed many while walking, they have a natural rhythm which makes them most suitable for being set to music. The album contains a selection of Capern’s poems, mainly sung but with some spoken by Chris Braund. The songs are punctuated by traditional tunes.

As Edward Capern meant for many of his poems to be sung they certainly make the transition from spoken to sung word well. From the first notes, the songs have a familiar feel to them, demonstrating how well the poems work as songs.

One could say that all Devon life is here. Many of the songs are in praise of country life and traditional ways. The Old-Fashioned Plough champions the traditional horse-drawn plough, as being far preferable to the new-fangled steam version. With its strings and tin whistle accompaniment, it sounds like a traditional folk song.

The simple pleasures in life, like a good hearty meal after a long day’s work are celebrated in The Dinner Bell, which has an almost nursery-rhyme like quality.

Nature, and especially the birdlife, is lauded in The Spring o’ the Dawn. Wyke sings in praise of the joys of early morning and the wildlife one can see at that time of day to a suitably joyful tune. In contrast to the other tracks on the album, The Song of the Keeper is a striking a capella duet.

Of course, any community will experience heartbreak and tragedy. Kitty Lile; or, Mazed Kate of Clovelley is beautifully poignant. It begins and ends with the sound of the sea and gulls. It is one of those stories so common in folk song, of a love lost at sea.

Driscoll sings The Robin as Weeping to a piano accompaniment which imitates the tolling of a bell. It is the heart-breaking song of the death of a child, a subject also covered in the part-sung, part-spoken Epitaph/A Song in Sorrow which also uses piano and strings.

It is perhaps appropriate for the album to end at Christmas with the glorious lilting waltz Christmas Bells. This has the glockenspiel imitating a chiming bell while the fiddles imitate a peals of bells. Here we also hear the French horn and double bass.

This album is a delight from start to finish.