Jim Causley - I am the Song 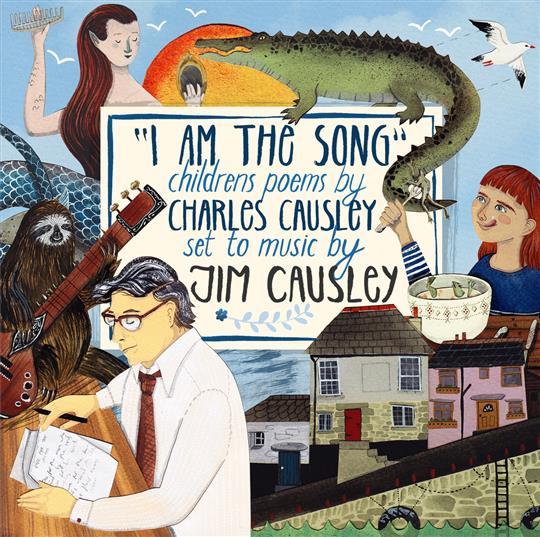 Following on from his beautiful album Cypress Well, Jim Causley returns to the oeuvre of his distant relative, the poet Charles Causley, for material. This time the poems were written for children. His velvet voice accompanied by an assortment of fine musicians are woven together to produce an album which will prove a pleasure for young and old.

An album like this is the perfect way to introduce children to poetry with its mix of nonsense, history, tradition and songs about real places.

Animals feature in many of the tracks - the opening song, Piccolo on Python, lists different animals playing a huge variety of instruments, and coincidentally features a variety of instruments in the accompaniment. One Day at a Perranporth Pet-Shop has a gentle jazz piano accompaniment with percussion and violin. Then there is the delightfully silly Good Morning, Mr Croco-Doco-Dile which features a baritone saxophone.

Nonsense is a feature of many of the poems set here - As I Went Down Zig Zag has a music hall feel and tells of the strange sights you might see while walking along a zig-zagging footpath in Launceston. It is also a counting song, going through the hours on a clock.

In amongst the frivolity, there are serious moments however, such as Lady Jane Grey, telling the story of the ill-fated queen, accompanied by a Tudor-sounding guitar. Lord Lovelace sounds like a classic folk ballad, with a serious accompaniment to match. A Mermaid at Zennor also has a traditional feel.

Some of the arrangements could become new nursery rhymes. I Don’t Want to Grumble is based around Hickory Dickory Dock, while Here We Go Round the Roundhouse, with its squeezebox accompaniment could easily become a new Here We Go Round the Mulberry Bush as it just begs to be danced to.

Half way through the album is the exquisite One for the Man, sung a capella in close harmony. The title track closes the album and sums up all that has gone before.

I am the Song is utterly charming without being twee. If you don’t have children, you needn’t be embarrassed about owning this album - it is sure to prove popular with children and adults alike.