The Druids - Pastime With Good Company 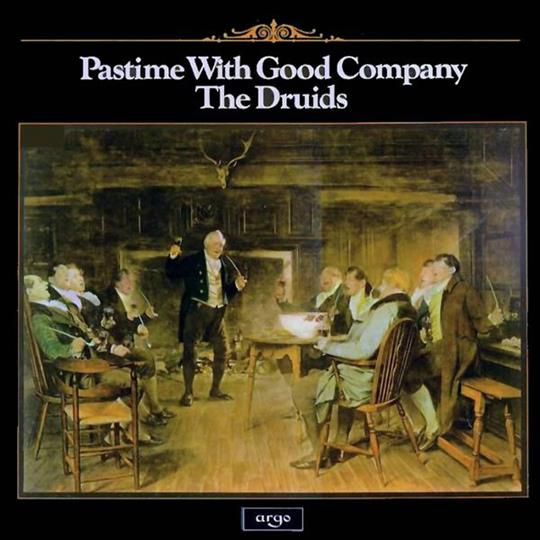 In the late sixties and early seventies folk music was undergoing one of its periodic revivals. Alongside the high profile folk rock of Steeleye Span and Fairport Convention there existed a myriad of smaller, acoustic acts who produced a body of fine recorded work, much of it now deleted. It is heartening, therefore, to see such labels as Talking Elephant rescuing this music from obscurity and giving it a new lease of life on CD.

The Druids seems an odd name for a quartet of North-west folk musicians. The pieces offered on Pastime With Good Company belie the severity of their title. The album is mostly upbeat in nature with an eclectic collection of ballads, tunes and chorus songs.

Recorded over two days at the grandly named Paramount Organ Works in Bolton, the album gives the listener a glimpse into a folk world rapidly receding into history.

Although the instrumentals are excellently played, the main meat on this CD are the songs. The Druids’ singing style is forceful and direct (if a trifle nasal) and is heard to best advantage unaccompanied on such tracks as Three Merry Men of Kent and The Diggers Song. Most of the pieces are taken at a fair clip. Indeed, it’s refreshing to hear a song like The White Cockade sung at anything other than funereal pace.

This is not an album for those who don’t like their fol-de-rolls and dido-days. Both Three Jolly Sportsmen and Marrowbones have their fair share of nonsense words but both are well sung. The latter song, a tale of cuckoldry and drowning, has a music hall quality to it that takes the edge off the violence (and the misogyny).

The highlight of the CD is undoubtedly The Irish Girl, a strange and haunting song about lost loves. It’s beautifully and unaffectedly sung by Judi Longden. It’s a pity that this song is her only solo on the album.

Never before released on CD, Pastime With Good Company is a small gem of a record which will surely please not only collectors, but anyone with an interest in traditional acoustic folk music.

Released on the 29th January 2016 by Talking Elephant. Originally released in 1972 by Argo.