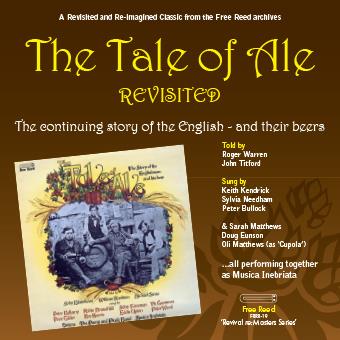 In 1977, Vic Gammon compiled a double album of readings and songs telling the story of ’The Englishman and his Beer’. A star-studded collection of folkies (including Peter Bellamy, Robin Dransfield and Pam Gilder) brought the songs to life interspersed with prose extracts read by Joby Blanchard, William Rushton and Michael Smee.

Twenty-seven years later a revised version of this album was performed at Stainsby Folk Festival. It was meant to be a one-off event but proved so popular that it had repeat performances and has now been committed to a 79 minute CD.

The new collection of musicians who take on the mantle of Musica Inebriata include Keith Kendrick, Sylvia Needham, Peter Bullock and Cupola, who throw themselves whole-heartedly into the material presented here.

Regular attendees at folk clubs will recognise most of the songs included on this album. Indeed, such songs as Bring us in Good Ale, I Likes a Drop of Good Beer and Nottingham Ale are regular staples of singarounds.

The Tale of Ale also includes a number of curiosities. Don’t go out Tonight, Dear Father! is a temperance song about the evils of drink which was taken up by the music halls and sung with mock seriousness. John Appleby (a version of which is on Cupola’s latest album) tells the odd story of a domestic quarrel that ends up in a drinking session.

The readings that intersperse these musical selections are taken from a variety of sources. Ably, if a little flatly, read by Roger Warren and John Titford, they cover everything from the difference between beer and ale to the porter’s scene from Macbeth.

Although this is a tribute to the original album, A Tale of Ale brings the story up-to-date with songs and pieces about the destruction of the local hostelry and the subsequent rise of the microbrewers which are bringing new hope to the traditional pub scene.

The album finishes with Keith Kendrick’s dance tune, Barman’s Waistcoat which, instead of stopping, fades gently out, perhaps implying that the story of ale never ends but will carry on, in spite of the big brewing empires and the plastic pubs, to be at the heart of the Englishman (and Englishwoman’s) way of life.