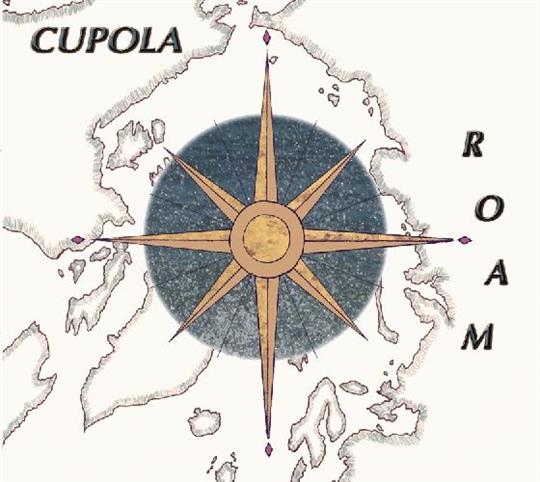 For a three-piece band Cupola make a big noise. All three players are multi-instrumentalists and the band don’t hesitate to overdub themselves to exciting effect. With their use of hurdy gurdy, a variety of saxophones and melodeon they can remind the listener of a slightly quieter Blowzabella. Cupola are their own band however, with a distinctive take on folk music.

Roam is the second album by the Derbyshire-based band and represents a significant step forward from their debut CD, Ivy. The thirteen tracks offered here run from traditional and original folk pieces to covers of songs by Jethro Tull and Tony Deane.

John Appleby sets out the band’s stall. This traditional song about a couple who like drinking is sung with conviction by Sarah Matthews whilst the trio provide a robust accompaniment of sax, melodeon and fiddle. The arrangement is at once complex and direct. There’s plenty to excite the ear.

The band really stretches out on the tunesets. There’s a hint of French folk music in Oli Matthews’ Dusty Keys. This tune is combined with Neil Davey’s Cornish influenced Tregajorran Furry and Sarah’s processional Dancing Derby Dragon to great effect. All three players take their turn in the spotlight bouncing the tunes between each instrument.

The album has its gentler side. There’s a lovely version of the Rob Harbron tune, Kissing Tree Lane which is coupled with Sarah’s minor key response to the piece, Apple Tree Games.

Sarah also shows herself to be a songwriter of no small ability. Both John Bright (about a fictional arctic explorer) and Gathering Round (a meditation on the importance of family gatherings) are well written pieces with strong words and memorable tunes.

One of the strengths of Cupola is the way they can make anything sound like a traditional piece of music. This is easy when the song is as good as Following the Old Oss, Tony Deano’s tribute to the Padstow Hobby Horse. However it takes a clever arrangement to transform Jethro Tull’s, slightly sentimental, Another Christmas Song into something worth listening to at any time of the year and not just in December. It’s a fine way to close out the album.

Many traditional folk recordings get released every year. Some of these make it but the vast majority sink beneath the waves, dead in the water before they are off the starting block. Roam doesn’t deserve this fate, it needs to be heard.