Sarah Matthews - As I Was Walking 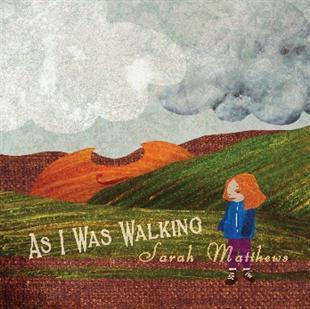 As I Was Walking is the first solo album from Sarah Matthews, a talented artist from Derby. Sarah is making use of her versatile skills on the fiddle, viola, tenor guitar and her distinctive voice across a multitude of different projects, playing as part of the dance band Cupola as well as featuring in other bands including Cross o’th Hands, Ram Company and other projects such as Folk 3D, Mills and Chimney Project and The Luner Men.

As the album starts we are hit immediately with Sarah’s powerful vocals telling us a soft and sweet love tale backed by a melodious drone of strings, making for a relaxed and easy listening tune in Abroad As I Was Walking. The theme of strong romance is continued later during My Love Is Like A Red Red Rose and Julie’s Chance, similarly using a fiddle background although painting us a sweeter image than the previous one, which has a more mysterious air.

The Year Turns Again gives us a thoughtful track about poor harvests and dead crops, but in an upbeat way as it deals with how we can still keep optimism in a new year. We get a similar idea of man facing the force of nature in Oh How That Valley Did Change talking of a poor village threatened by flooding, where the people pulled together to build dams and move away in the nick of time. This track uses a tenor guitar rather than a fiddle as the main background instrument having the fiddle take the fore next to the vocals using the same soft and sibilant style found throughout the entire album.

The exquisite fiddle theme is reprised with some exciting instrumental sets, including Stone Monkey Rapper Sword Dance and Le Bandeu Perdu which sit cheekily between the major tracks, introducing a foot-tapping tempo which leaves you wanting more, without detracting from the main musical or lyrical themes.

April Song and Chelsea Morning are by far some of the most memorable songs I have heard for a while. Although they differ by the first being a vocal and the second bringing back some more of the excellent fiddle, both seem to take literally the old phrase of ’If you can’t say anything nice, don’t say anything at all’, pulling out all of the most adorable words and images you can conjure about beautiful things and setting them to a beautiful score which you want to listen to again and again.

The vocal tracks are some of the highlights of the album, such as The Ballad Of John Bright. This track tells another heart warming tale about a man who kept his crewmates’ spirits high during their harsh times at sea. The ending of this track has a melancholy feel as John Bright perishes, but his crew mates want to keep his spirit alive by telling tales of him.

Another memorable track is Cathy Shaw which is a marvellous tale about a young chamber maid who runs away and becomes a miner by disguising herself as a young man, only to be found out when her shirt gets ripped in an accident. T’owd Brahn ’En is another comical little story. Both of these songs are sung joyfully and with excellent comic timing putting a smile on your face as you listen along.

The final track The Fiddle And The Drum gives us a contrastingly sadder ending given the upbeat theme of the rest of the album, but still finishes with Sarah’s soft and soothing vocals which are always a pleasure to listen to.

Sarah has presented us with a pick me up to really help elevate your mood , her soothing vocals and pleasant fiddle playing will do wonders to lift your spirits and helps prove that the world is certainly not all bad.