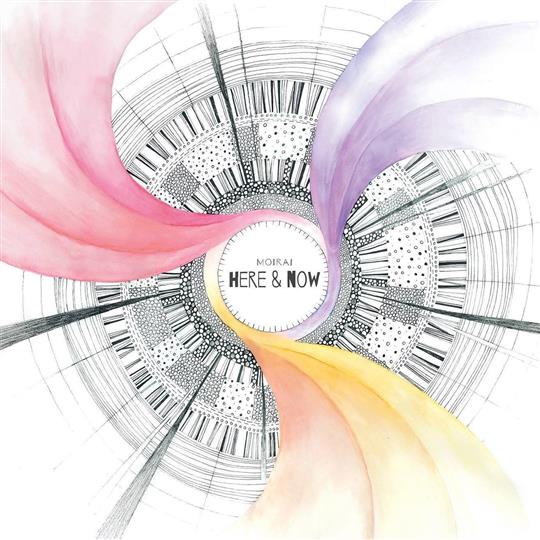 Female trio Moirai return with their second album, Here and Now. Moirai, named after Ancient Greece’s three spinners of fate, explore a variety of material to produce a rounded and complete album. It includes tracks that are instrumental and lyrical; traditional and new; fast and slow.

Each member of Moirai is creatively invested in Here and Now. Freya, Biggs and Matthews have each learned, arranged, composed or written lyrics for this album. Perhaps as a direct result of this, the band evenly share the spotlight. The contribution of each member is easily discerned.

Throughout the album Moirai deliver fine melodies underlined by strong harmonies and assertive rhythms. Each track is satisfyingly rich and full-bodied. Moirai’s consistent sound, mixed with breadth of inspiration and regular changing of the baton means that Here and Now never becomes boring while maintaining a consistent sound throughout.

Here and Now opens with Dust if you Must, the lyrics of which are sourced from Facebook, Moirai adding the chorus and music. A humorous and rebellious song it will nonetheless become a protest anthem for those seeking to avoid their household chores.

Moirai do tackle heavier subjects: Rolanda’s Grandmother looks beyond the immediate effects of war to the turmoil that those involved experience years after armed conflict has come to an end. Meanwhile, Brexit Biscuits / Calarem, Calarem Pas, is an energetic instrumental expression of frustration with last year’s referendum result.

Here and Now’s song selection focuses upon the experience of women: The Duffing Mistress, The Bed Making and The Bellamont Sisters, are traditional songs drawing on historical experiences. Rolanda’s Grandmother and The Dusting Song mark new contributions to the record of the female experience.

The titular track calls on us to pause the hustle and bustle of the modern goal-orientated life to reflect on the immediate moment. Daz Barker’s poetic and thoughtful lyrics draw you in and succeed in slowing time.

Here and Now is an excellent album made complete by the wide selection of music featured. Let’s hope Moirai are fated to provide us with many more albums like this.