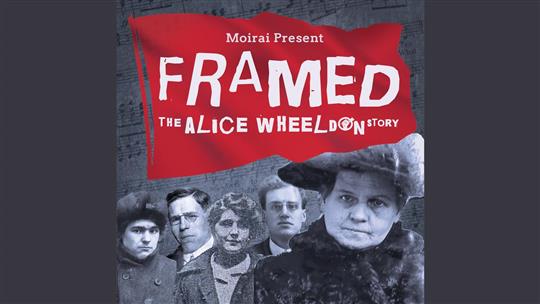 If you’ve not encountered them before, Moirai, named for the Greek goddesses of destiny, the Derby trio comprise Jo Freya, Mel Biggs and Sarah Matthews and this is their third album and the story it tells is well worth exploring.

In March 1917, Wheeldon, a Derby-born supporter of suffrage, daughter Winnie Mason and son-in-law Alf Mason, were convicted of conspiracy to murder the Prime Minister, David Lloyd George, and Arthur Henderson, the Labour Party chairman and refused leave to appeal.

Much of the evidence was fabricated by Alexander Gordon and Herbert Booth, undercover government agents respectively posing as conscientious objector and deserter, who set them up in an attempt to undermine the anti-war movement. Wheeldon was released on licence that December and died of ill-heath in 1919, with the campaign to clear their names still ongoing.

This fascinating album tells of events from the perspectives of different characters through the contemporary lens of the three musicians.

Accompanied by drone and bodhran, Matthews starts things off establishing the family and political background in the Prologue before the voices join in harmony for a version of I Didn’t Raise My Boy to Be a Soldier. An adaptation of the 1915 anti-war song by Canadian writer Alfred Bryan, here overlapping with two further differing sets of lyrics and melodies by Freya to underscore the debates of the period, the song also inspiring Matthews’ brief unaccompanied Alive The Soldier as she reflects on her situation.

A jaunty contrast is presented with Bottom Up! a melodeon driven music hall style nod to the Clarion Cycling Club, first established in Birmingham, which proliferated to become a hotbed of socialist activism. Wheeldon and her three daughters all being members. From here, My Door Is Always Open introduces Wheeldon, a well-respected member of the Derby community who sold second-hand clothes from her shop on Pear Tree Road, followed by instrumental fiddle waltz Alice.

Her political activities campaigning for women’s rights are the basis of Proper Gander, a lively wheezing tune based around Harry Champion’s music hall favourite Oh That Gorgonzola Cheese moving on to DORA Is Here For You, a clarinet-coloured number noting the 1914 introduction of the Defence of the Realm Act intended to suppress the supposedly ’destabilising’ work of such as Wheeldon.
This leads on to Perfect Puppet Part 1 and the acapella Poison Plot which, interpolated by the clarinet-led instrumental Pulled Strings, unfold the conspiracy and her entrapment, followed by the trial in the Freya-penned Courtroom Scene and seven time fiddle instrumental Twisted Round. Part 2 of Perfect Puppet, which arrives later, explores ’Alex Gordon’ from a new perspective.

The sombre drone setting of Letter From Hettie to Aunt Lid draws on a letter by Wheeldon’s daughter to a family friend about her abhorrent treatment while in Holloway prison (she was subsequently acquitted) and, sustaining the framework, the unaccompanied Win To Hett imagines a letter between the sisters. It then moves into the final stretch with What Am I Here For? a musically complex number inspired by Wheeldon’s own defiant letters from prison before the fiddle-backed Round Up details what happened next to the key players with Hettie’s Now With Mam again based on a letter to Aunt Lid as Winnie laments her sister’s death in 1920.

It ends with fluttering melodeon on Ivy and Tulips, a number by Matthews and Biggs inspired by the words spoken at Wheeldon’s funeral and quoting Shelley’s poem about Keats in celebration of her legacy and in tribute to those who continue the fight for what is right.

To complete the picture, while not part of the story here, it should also be noted that Alice had another daughter, Nellie, who wasn’t involved in events and moved to America where she became a Laundresses Union organiser, and a son, Willie, who emigrated to Russia in 1921, took citizenship and was executed on Christmas Day 1937 during the Stalinist purges.

This is an important and compelling album that tells a powerful and very human story of establishment injustice without hectoring and, drawing on music hall and folk traditions, with memorable tunes and lyrics that are as accessible as they are resonant with today.

Recorded, mixed and mastered by Doug Bailey at WildGoose Records and Studios