David Gibb - Letters Through Your Door 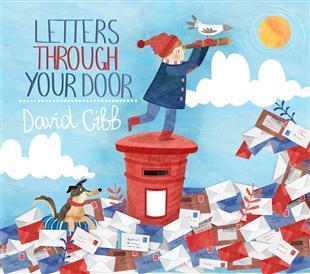 Folk music written specifically for children has had a long and noble tradition. Both Pete and Peggy Seeger have released a number of records for the very young, and this has continued in the UK with excellent recent collections by both Megson and Jess and Richard Arrowsmith.

Now David Gibb, bolstered by funds raised through Kickstarter, has brought out a CD of mostly self-penned songs for children and families. It’s a fun listen, even for grown-ups.

The album is very upbeat with lots of bright sounds and sing-along choruses. The album opens with two of its strongest tracks. From A to B is a nonsense counting song about fishes who read Shakespeare and eat ice-cream, whilst There’s a Dragon in my Bedroom has the added bonus of a Lucy Ward vocal and this wonderful couplet:

’There’s a dragon in my bedroom and I think he’s here to stay
’cos he set fire to my duvet, Mum only washed it yesterday.’

Although Letters Through Your Door is informed by the folk tradition, Gibb spreads his musical influences net far and wide. The Dog Doesn’t Listen to Me is an out-and-out rocker with a blistering solo from harmonica wiz Will Pound. This is a followed by a version of Drop Peter Drop which has the bright guitar sound associated with African soukous music.

There are a number of traditional songs on the album. The most familiar being the lullaby, Hush Little Baby. Gibb has augmented the usual lyrics with verses by Sylvia Long which are sung by Nancy Kerr. This is an untempo version with lovely banjo accompaniment by Cliff Ward.

The album changes focus a little with the final track, Wiggle Your Way Towards Me, which talks about the feelings a parent has when seeing their child after being out at work all day. It’s a song that has a melancholy edge to it.

Letters Through Your Door is a fine collection of songs that children will love to sing and dance along with. This colourful CD (with great art by Pippa Curnick) will make a great present for the child in your life, no matter how old they are…

Released on the 6th October 2014 by Hairpin Records.