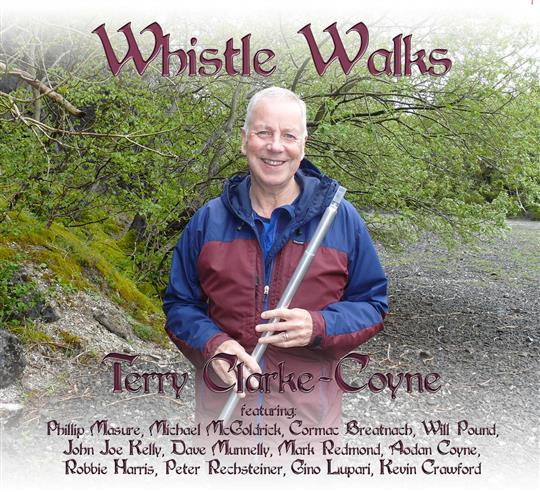 After twenty years since his previous solo album and in the wake of the success of his Youtube series with the same name, whistle and flute player Terry Clarke Coyne is back with Whistle Walks. A collection of eleven tracks, the line up includes sixteen great names of the folk scene such as Michael McGoldrick, Kevin Crawford and Cormac Breatnach.

From the opening set of reels Bird in the Bush / Notes to Coyne / Floating Candle, recorded with Michael McGoldrick, Gino Lupari and Will Pound, Clarke Coyne’s dexterity is under the spotlight together with his careful choice of both traditional and modern material. The waltz and reel medley The Other Side / Tripping Down the Stairs and the final jig set Johnny O’Leary’s / Kilfenora / Paddy Keenan’s are other remarkable examples of his virtuoso playing, whilst airs like Freeflow and Liverpool Remembers provide quieter meditative passages in a sparkling album full of fast paced tunes.

Among the highlights from this album there is also the very surprising Irish Mass Tunes / O’Carolan’s Concerto set, featuring the unusual combination of baritone whistle and church organ, and the joyful set of ¾ marches World Peace Flame / Hope. Though Clarke Coyne’s whistles and flute are of course centre stage, the personal styles of the different musicians involved in the project is often palpable.

Take for instance Will Pound’s freeflowing harmonica playing in the opening medley, Cormac Breatnach’s unmistakable touch in this reimagined rendition of The Longer Note, also known as The Long Long Note, or Natalie Haas’ distinctive cello playing in Floggin.

Whistle Walks has been conceived and recorded with the use of remote collaboration technologies during the long months spent in lockdown; however, everything sounds as smooth and clear as if it was entirely recorded in a studio. If Clarke Coyne’s goal was to create an uplifting musical experience full of verve and passion, mission complete.