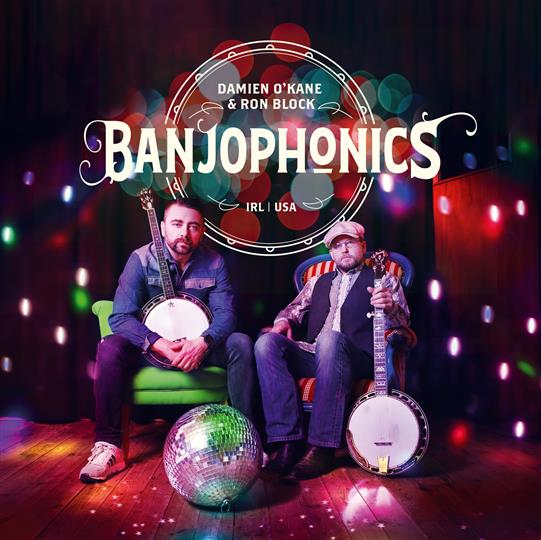 From its creation by enslaved Africans in the American Deep South to becoming a staple in multiple folk, jazz and pop styles on both sides of the Atlantic, it’s fair to say the banjo has been on a bit of a journey in its 300-year history. Two of these paths converge on Banjophonics, the second album from Irish tenor wizard Damien O’Kane and American five string supremo Ron Block.

The result is a collection of largely original tunes and songs that comfortably straddles the Irish trad and American bluegrass traditions, with a strong contemporary twist thanks to the presence of synth bass and percussion. Despite the considerable skill of both musicians, the duo’s arrangements are far from a cliched duelling banjos shootout.

Instead, the two largely take it in turns to lead while one plays a supporting role as on Monster Rabbit or adding an extra layer of harmony as with Soundcheck Sonics. Though when they play in lockstep on the effusive Marinie’s Melody, the sound of the strings chiming together is infectious.

Within this complementary rather than competitive approach, there’s plenty of opportunities for both men to flash their chops. The scarcely believable ornaments from O’Kane on Happy Chappy give off a bubbly effusiveness, while Andy Brown’s features Block reeling off double time arpeggios effortlessly.

While the individual virtuosity is something to behold, the duo proves throughout the album to be more than the sum of its parts when gently toying with lolloping slow reel The Taxi Driver or on Daisy’s Dance where the subtle slides of the tune contrast with precise and delicate broken chords before an absolutely slamming middle section.

The contrast of mood and groove from track to track and within each tune set does a great deal to showcase the underappreciated versatility of the instrument. EDB & Lady Grey reflects wistfully on the coming of age of Block’s children, while the tender and intimate Bide The Night achieves the unlikely feat of making the banjo sound romantic.

The duo are more than capable singers as well; Woman of No Place features O’Kane’s rich Coleraine baritone, while on Endless Wanderer Block inverts the usual trope of the homesick journeyman to bemoan the lack of travelling during the pandemic.

Another Block number, The Thrifty Wife, shows the closeness of the two traditions. Written for his partner Sandra, it’s the kind of reel could quite easily be heard in a pub session anywhere in Ireland, but with Sierra Hull’s mandolin added to Block’s rolls and slides has more than an element of bluegrass about it.

On Banjophonics, O’Kane and Block use their craft to put their instrument in a variety of settings that are both familiar and modern, finding a balance between technical virtuosity and memorable melodies. If you think you know the banjo, think again.