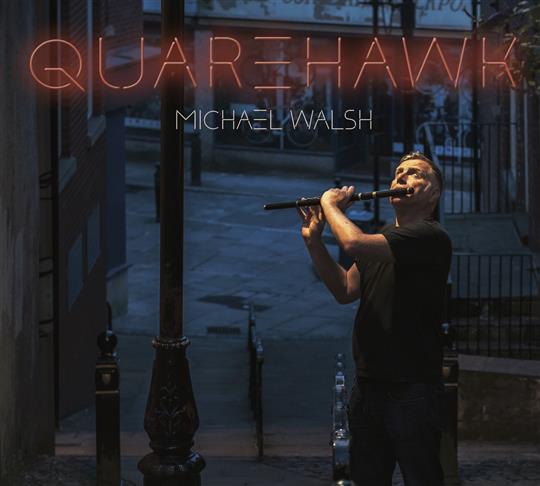 Born in Manchester to a family of Irish origin, raised in Stockport, currently living in Sheffield, composer, singer, flutist and whistle player Michael Walsh has collected his experiences and his love for the traditional music of both the British Isles and the Iberian Peninsula in Quarehawk, an album that reflects his life journey of recent years through love, loss and personal growth.

The title of this work comes from an expression, mostly used in Ireland, that could be rendered in many ways. An artistic attempt to explain this term is given in the title track, a set of jigs which also includes some spoken words, a celebration of the author’s link to family and friends.

If we put aside the remix of that track at the end of the album, the record opens and closes with a vinyl lathe live recorded in Newcastle-upon-Tyne, a choice that enforces the sense of intimacy that surrounds this release.

Quarehawk is entirely dedicated to Walsh’s father and the listener can easily notice a couple of references to this influential figure in the author’s life. Take for example the heartfelt rendition of Come my Little Son or the lyrics in The Visitor, written by Mancunian poet Mike Garry.

Walsh’s flute playing, inspired by the works of giants of the instrument such as Roger Sherlock, Tony Howley and Kevin Henry, is densely ornamented as the Sligo style commands. The best proof of his affiliation to this school are tracks such as the Boys of the Lough / Trip to Birmingham and Ships in Full Sail / Killavil Jig / Michael Dwyer’s.

Walsh’s whistle playing is equally fluid, as demonstrated in Paddy’s Return / Trip to Athlone and in The Boys of Blue Hill / The Stockport Hornpipe, the latter being a set of early 19th century tunes, the second dedicated to the town he grew up in. From the accurate choice of the material to the thoughtful interpretation, through the echo of his Irish ancestors and his love for England, this album turns the spotlight on the soul of an artist whose sensibility is as great as his dexterity.