Will Pound - Through the Seasons: A Year in Morris and Folk Dance 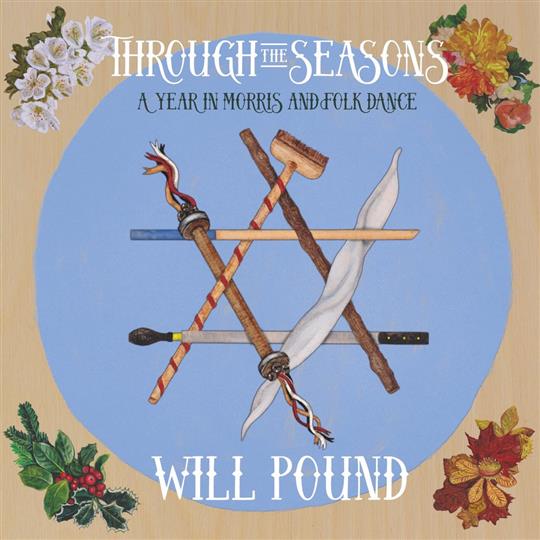 You might think that an album of tunes used for Morris dancing would be rather dull, but prepare to be proved wrong. The musicians Will Pound (melodeon, harmonica, drums, clogs) together with Benji Kirkpatrick (bouzouki, banjo, guitar) and Ross Grant (fiddle) are extremely skilled at their art, both as accompanists to traditional dance, and as performers in their own right.

Involved with Morris and folk dance since birth, Will Pound shares his enthusiasm for the genre in his joyous playing and in the interesting notes to each tune, and that enthusiasm is infectious. The album features dance tunes from a variety of traditions: Cotswold, North West, Border, Molly, Rapper and Longsword.

The album begins with several tunes popular in the Cotswold tradition. Here, the trio introduce themselves, passing the melodies between them like a relay baton and developing the tunes with each repetition. Eliza Carthy joins them on vocals in the Nutting Girl, which she and Will Pound have arranged together.

The Liberty Bell March marks a switch to the North West tradition. This track is great fun. Many will associate this tune with Monty Python’s Flying Circus, but it was originally a brass band piece by the American composer Sousa, and became a popular tune for carnival morris teams and north west clog dancing.

Will Pound’s arrangement has himself on harmonica, drums and clogs and John Kirkpatrick on button accordion. It is guaranteed to make you smile.

The North West section of the album continues with Brighton Camp / Salmon tails. The first tune is traditionally used for the Saddleworth Morris Dance and the track begins with a recording of the Saddleworth Rushcart Parade, a spectacular event held in August. Two brass players join on this track adding to the sense of occasion.

The Newcastle Kingsmen burst in, as they are wont to do, on Blackthorn Stick / Irish Washerwoman, and their stepping accompanies Will Pound’s harmonica, and unusually, a piano - not the most portable of instruments for a dance tradition that tends to be ambulatory.

Longsword is represented in two tracks, one from Ampleforth, and one from Shetland - the Papa Stour Sword Dance, a very distant tune popular in an English tradition.

You can see the hankies waving and the sticks thwacking, as the playing just exudes the joy of dance.

Released on 4th May by Lulubug Records