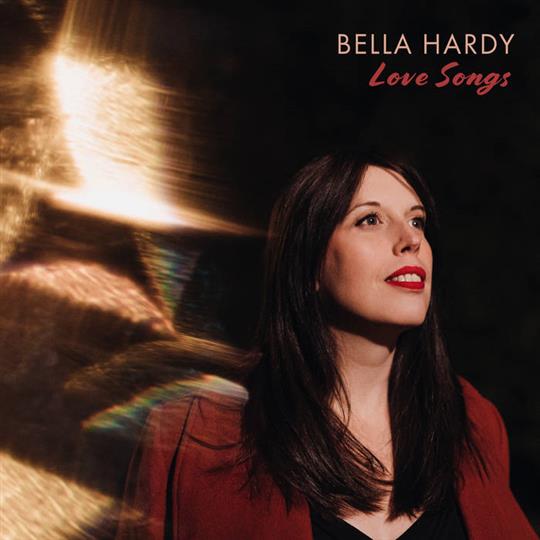 Bella Hardy’s tenth studio album Love Songs sees her return full circle to her trad song roots, as first witnessed in her 2007 debut Night Visiting. The intervening years have seen her explore interpretations, original compositions, a visit to China to gain cross-cultural inspiration, producing a greatest hits collection and hardback lyric book as well as guesting on collaborations and projects.

The songs presented here are beautifully understated and despite having been recorded within the space of three days are far from unpolished. Hardy states that so many of these songs are intrinsically ingrained in her and indeed they sound very comfortable and familiar in her performance. There is solid backing on piano and clarinet by Tom Gibbs and on guitar by her producer Mike Vass.

The album opens with a self-penned fiddle tune, Summer Daylight Winter Darkness which sets the tone with its gentle fluidity. Hardy’s vocal performances on the songs that follow are crisp and powerful in their subtlety, with the dexterous ornaments that are her hallmark.

Standards such as Hares on the Mountain, Greenwood Laddie and Sprig of Thyme (a variant of The Seeds of Love, famously collected by Cecil Sharp at the outset of his folk curations) sit comfortably amongst less familiar songs. The Navigator’s Bride balances dual perspectives on a locally-flavoured tale about the social difficulties of a local farmers daughter coupling with a railway navvy ’incomer’ working on the Edale Tunnel. There’s also the unrequited love expressed in Loving Hannah and lullabyesque Silverlight among the many gems here.

One of the shortest tracks, I Think Of You, deserves particular praise. The unfolding memory glimpses and sensory recollections entwined in this neat song feel cinematic against a dreamlike pizzicato accompaniment.

The lyric conveys the heartache and fears felt by a loved one on home front for a WW1 soldier abroad; the restrained simplicity packs a poignant punch (if this track touches your heart then definitely look back to Bella Hardy’s contribution to a 2014 project called Songs For The Voiceless; a superb collection of original works inspired by the centenary of World War I’s outbreak).

It has been a great pleasure to hear in Love Songs, the fruits of enforced lockdown containment which Hardy says led her to a renewed exploration of pared-back performance and which ultimately inspired the format this album. An exquisite collection that will delight fans old and new.

1. Summer Daylight Winter Darkness
2. Hares On The Mountain
3. My Johnny Was A Shoemaker
4. Sprig Of Thyme
5. The Navigator’s Bride
6. I Think Of You
7. Greenwood Laddie
8. Awake Awake
9. Lowlands Away
10. Silverlight
11. Loving Hannah