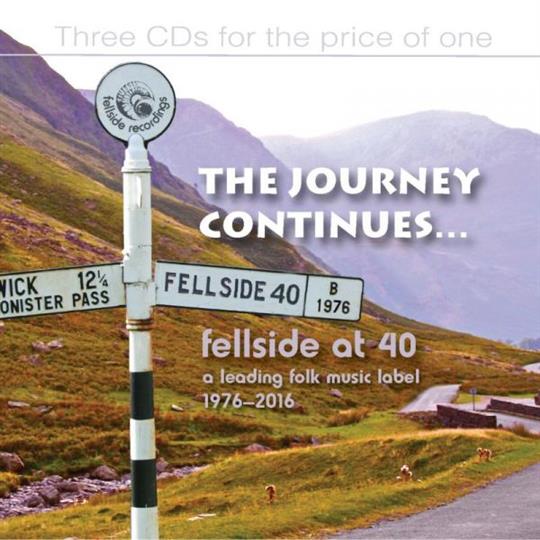 Nobody buys CDs anymore. Anyone still running a record label would be better off giving up the ghost rather than throwing good money after bad.

Or at least so goes the accepted logic. True or not, one label showing that this is definitely not a uniform trend is Fellside Recordings, who have just celebrated their 40th anniversary.

To mark the occasion, the Cumbria-based stalwarts present The Journey Continues: Fellside At 40. Following on from 30th anniversary compilation Landmarks, this three-disc set is an overview of Fellside releases in the decade since then, along with choice selections from the archives.

Probably Fellside’s most commendable policy over the years has been backing young talent. And foremost among these in the period covered here have been Greg Russell and Ciaran Algar, with the breezy Away From The Pits featured here.

Perhaps Algar learned the knack of writing songs about his native Stoke-on-Trent from fellow Potteries and Fellside band The Queensberry Rules. Despite the latter having now disbanded, Your Own Roads is a tale of homesickness told in reverse that is as affecting as it is tuneful and humorous.

Also featured is Polkas, from the frustratingly short-lived Last Orders, which contains enough youthful verve and swagger to turn Camptown Races into a rip-roaring folk tune. Similarly sprightly is Only A Soldier from Pilgrim’s Way.

Not that the old stagers don’t get a look in. The compilation includes slices of vintage Martin Carthy & Dave Swarbrick and John Kirkpatrick, as well as a potent unaccompanied rendition of The Demon Lover from Nick Caffrey of The Wassailers.

Veteran American singer Sara Grey also features with Lonesome Roving Wolves, on which vocal harmonies are elegant and full-bodied but never saccharine. Meanwhile Bob Fox and Stu Luckley’s performance of Two Magicians carries a stomp as insistent as the blacksmith in the song’s lyrics.

As well as giving a valuable platform to new music, Fellside have also built up a catalogue of tasteful reissues. Whilst the label has put out several discs of A.L. Lloyd, here a previously unreleased recording of The Rambling Sailor sees light of day.

Also featured is Peter Bellamy with Mandalay. Whilst perhaps one of the more ordinary tracks from the many superlative albums of his, it does highlight the worthy duty performed by Fellside in keeping them in production and available for new generations of singers to take inspiration from.

No label is immune from the occasional misstep, as The Journeyman shows, a polemic against railway privatisation that, lyrically, is somewhat heavy handed. That’s probably an inevitable byproduct, however, of not being afraid to release material likely to divide opinion, such as Jungle Queen by The Maerlock Big Band, a jazz-funk-fiddle reel mashup that is perversely enjoyable.

Whether to prove that the recording industry remains a worthwhile pursuit or simply to celebrate some fine releases, Fellside have produced a compilation diverse enough to have something for all tastes. Roll on the 50th anniversary.

Disc One: The Long And Winding Road

Disc Three: A Bit Of A Detour