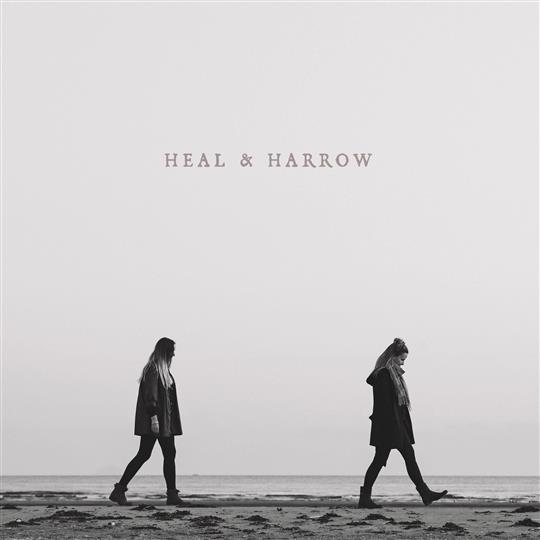 Heal & Harrow’s eponymous debut album release was inspired by historical atrocities in Scotland in the 16th and 17th centuries. A collection of songs, powerful in their eloquence, which entice us to learn more of those dark times. Recorded and produced on the Hebridean isle of Great Bernera by Andy Bell, it is well rooted.

The harp of Rachel Newton and the fiddle of Lauren MacColl already have numerous plaudits between them, both individually and within ensembles (RANT, The Furrow Collective, Spellsongs and Salt House to name but a few). In joining together as Heal & Harrow, MacColl and Newton are a sum greater than their parts and their vocals in both Gaelic and English give a moving testament to just a handful of the 3000-plus women that were victims of the femicide arising from Scotland’s witchcraft acts of 1563.

The duo were first inspired to create this album by a visit to the Witch’s Stone in Dornoch, where in 1727 Janet Horne was the last person to be legally executed under the Witchcraft Act.

Not restricted to herbalists, healers and midwives, the malleable nature of the laws meant that any woman that was unconventional or even inconvenient could be disposed of with an accusation and successful prosecution of witchcraft.

The songs recalling real women and events are supplemented with wefts of celtic folklore as well as illuminating literary excerpts of the era, such as poet Robert Burns. They draw upon stories commissioned from the author Mairi Kidd (’Warriors, Witches and Damn Rebel Bitches’) and range geographically between Shetland and the Solway.

The haunting opening track Lilias sets the tone of the album, recalling Lilias Addie who was buried in the intertidal space of Torryburn Bay, Fife, under a half-tonne slab. It compares the fragile human tragedy of the persecuted with the weight of an authority which used the supernatural beliefs of the time to justify the slaughter. The compositions are emotionally charged, insistent and cinematic in their bold sparseness.

Listeners that (rightly) follow the album through in order are bounced between contrasting moods. For example: the fifth track Behind The Eyes is a heart-rending instrumental with the added poignancy of spoken quotations at its close, immediately followed by the piercing screech at the start of Corp-créadha (Figure of Clay) which develops into a lively fiddle reel.

This followed by Judge Not, an engaging ballad about a cross-dressing Witch-Pricker that condemned other women with false testimony but was later imprisoned when discovered by chance to be a woman herself. The eighth track Máiri opens with Newton’s beautiful Gaelic acapella and opens out into echoing drone and fiddle that evoke the island shores of Mull where nursemaid Mary McLeod was banished for an undefined crime.

The closing track, Eachlair, summons a fictional figure from Gaelic folklore usually regarded as a villain but in this context providing reparation for the victims described in the previous songs with the closing lyric “I’ll bide my time until I rise again” in another example of historical miscasting.

This album seeks to add weight and bring attention to the growing campaign to pardon the "Witches of Scotland” and to preserve their memory and stories. Heal and Harrow’s musical testimony is a well-crafted and informative addition to that cause as well as a fascinating work in its own right that Newton and MacColl can be proud of.

Released February 4 2022 on CD and digitally.