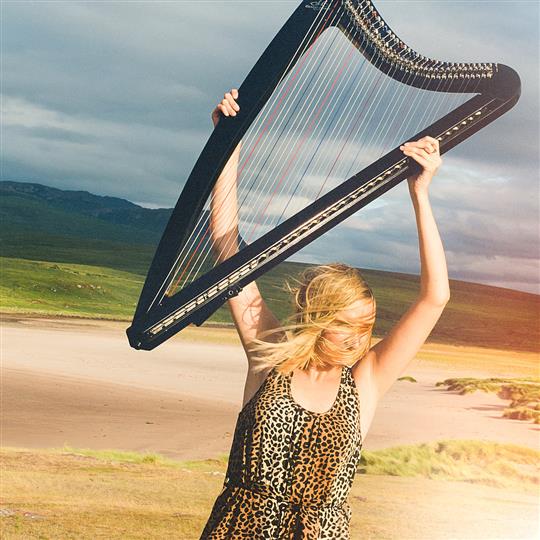 A solo album is the very truest sense, West features Newton at her most transparent and candid. Without any accompanying players Newton delivers a deeply personal album.

West, shares its name with Newton’s grandfather, so named because he lived to the west of his small Scottish community. The name’s combination of the geographic and the personal runs throughout the album. Arranged and recorded on location at her grandparent’s house West is a labour of love to the landscape in which she spent her childhood summers. West’s instrumental tracks, such as Skye Air, are an attempt to musically depict the landscape; many are short like a musical amuse bouche.

There is a magical tension between the relative simplicity of Newton’s singing and the complexity and depth of her harp. In songs such as Maid of Neidpath her singing suggests that she is letting you in on a secret, the harp suggests that below the surface there is still much you do not know. Many singers can accompany themselves in a way that compliments their singing, few can do what Newton achieves and add new layers to the song through their accompaniment.

Newton has a real talent for playing the vulnerable and broken hearted as Once I Had a True Love and Jolene demonstrate. While Newton can certainly sing about unrequited love a broader subject matter would add to West and allow Newton new musical avenues.

West is an intriguing album that solidifies Newton’s reputation as one of the best talents in British Folk Music. Packed with mystery and intrigue, no one play-through ever sounds quite like the first.

Released on Shadowside Records on September 28, 2018