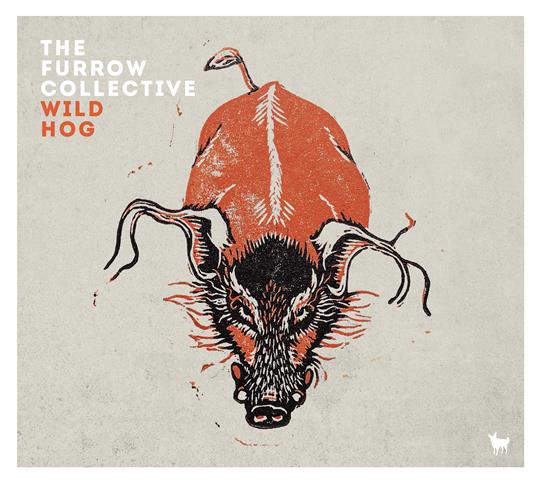 The Furrow Collective is the first signing to Andy Bell’s Hudson Records. Wild Hog is the English/Scottish quartet’s second album and unsurprisingly, considering the membership of the group, is a collection of English and Scottish ballads.

The members are: Lucy Farrell (fiddle, viola, voice), Rachel Newton (harp, fiddle, voice), Emily Portman (banjo, concertina, voice) and Alasdair Roberts (guitars, voice) This wealth of musical talent means a variety of textures and arrangements, with members taking the lead in the songs they have brought to the group.

The opening track, Wildhog in the Wood, which gives the album its title, is an American version of a Child ballad, and the inclusion of the banjo gives it an old-time feel. However, its roots are not in question as it is led by Roberts.

As you might expect, there is a fair share of melancholy on the album, often due to young women being spurned in love. Newton and Portman join Farrell on Dear Companion, a very gentle song, in spite of the heartbreak it conveys.

Barbara Ellen is the most collected English ballad and this version portrays Barbara slightly differently than in many others. The accompaniment under the voice is simple, with some interesting instrumental interludes. You will also hear the Coracle String & Reed Ensemble on this track.

The Furrow Collective certainly know how to portray the drama of a story. Newton leads the Scottish ballad Prince Heathen, in which unison voices help to emphasise the salient points. A solo voice is heard when the Prince’s victim, Margaret herself is speaking.

The most striking track on the album is Polly Vaughan, a stark and sinister version of a familiar ballad. Farrell takes the lead with a rather free vocal style, above instrumentation which has an almost improvised feel.

Warnings are a common theme running through some of the ballads. The quartet all join in with lovely harmonies in Many’s the Night’s Rest, which again features the banjo. The listener is left wondering what has happened at the end: "you never shall do it again."

Roberts leads Beneath the Window of my Cell, which he learned from the singing of traveller Sheila Stewart. This is another stark arrangement, as befitting the subject and closes the album.

“Come all ye roving fellows and a warning take by me” could apply to so many of the songs on this album. The brevity of The Maiden Hind takes the listener by surprises and emphasises the shocking ending - listen to your mother is its message.

The songs on this album are delivered in a variety of ways, but all in an intimate way which draws the listener in. Wild Hog gently demands your attention, as you become involved in the characters of the stories.