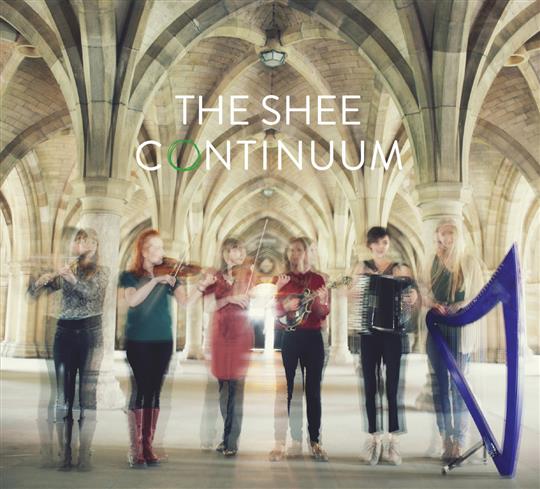 In the immortal words of Tom Jones, it’s not unusual in the folk world for disparate musicians to work together to see what their interplay can conjure up, yet with Continuum, The Shee have created a truly unique collaboration.

So to start at the beginning, Continuum is a rather interesting project/concept. Conceived by the band with the support of Celtic Connections and with Duncan Lyall on production and mixing duties, it arrives as both a new piece of work and celebration of their ten years together.

To mark the occasion, the six ladies have each been given license to choose six influential musicians and commission a piece for the band to record. So come on down Martin Simpson, Kathryn Tickell, Andy Cutting, Karine Polwart, Brian Finnegan and Chris While. Not a bad little team of writers and musicians to have composing for you.

Yet for all the fanfare, it’s Laura Beth Salter’s haunting Ghostly Shadows which gives the band a chance to do their own thing and shine before they embark on a journey of collaboration. It truly is a splendid reminder of what The Shee are about before they start off on the collaborative pieces, the first of which sees Kathryn Tickell’s distinctive style interpreted a la Shee, all pipe free and using the strings to carry the jaunty flights.

Combining Mary Brooksbanks’ Jute Mill Song complete with original soundbites and Karine Polwart’s Song For Mary is a highly unusual and imaginative blend, taking lyrics from the original song and working them into her own arrangement.

Perhaps not surprisingly, Amy Thatcher gets the honour of commissioning Folk Musician Of The Year, Andy Cutting, in a dancing accordion piece. Taking it down a little, Cradle Song does what it says on the tin, with a sleep inducing rhythmic bleep from the combination of Chris Wood and Hugh Lupton, in a lullaby air and what Chris has called a real “coming together.”

It’s not just about the collaborations though. There are a jolly pair of rollicking original tune sets at the mid point, The Vampire Rabbit / Don’t Work Too Hard developing into a breakneck piece of jiggery folkery.

The majestic presence of Martin Simpson gets the closing slot with a deeply personal and reflective song given a suitably tasteful reading - all “bridges burned and all hope gone to seed." Maybe it proves a rather fashionably subdued ending, yet rounds off a record which is innovative, creative and beautifully crafted.

1. From The Shadows
2. Ower Late For The Lasses / Sheepolska
3. Jute Mill Song / Song For Mary
4. Lady Grey
5. Cradle Song
6. Peaks / Benasque
7. The Vampire Rabbit Of Newcastle / Don’t Work Too Hard
8. Precious Tears
9. The Birds Of Salim Ali / On The Breathing Road / The Soaring Seas
10. Jaspers / Dance With Me