Katie Doherty and the Navigators - Flow 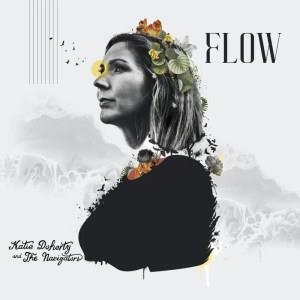 Flow is an unforgettable album. The 10 songs written by Katie Doherty cover a range of topics including parenthood, Greta Thunberg and local communities, alongside Dave Gray and Shona Mooney’s enchanting accompaniment. The album flows flawlessly, a testament to its underlying theme: the flow of creativity.

The first track, Never Before, gives a taste of the uplifting instrumentals and soaring vocal signature of the whole album. Four Strings tells of a conversation between a violin, which doubts its ability to make a difference in the world, and the wind, which reminds the violin that the sound of a melody is sometimes all someone needs.

The driving beat behind Hey Little Girl reminds us of the power behind Greta Thunberg and the risk of climate change, while rich men intimidated by her pigtails worry only about their wealth. Flow has a captivating melody played by the band and Doherty herself on piano.

A Lifelong Stupid Dream begins with a relaxed and calming call and response between Mooney’s fiddle and Gray’s melodeon. Just when you think the track is about to end there are a few minutes of groove that jolt you right out of your stupor, only to seamlessly return to a hazy state at the end.

One of the best tracks on the album, Red Dress, sticks in the head for days. It goes on a journey throughout but returns to the familiar theme led by Doherty’s masterful vocals. Summer Song features a tune by Gray, Nookton Farm, and is a warming end to the album, ensuring it is full of life right until the end.

Flow is one of the best albums of 2022. The talent of both Katie Doherty and her Navigators is used to bring the songs to life, allowing the stories to be told and creativity to prosper. Expect powerful songs, classy melodies and driving accompaniment throughout, and above all, let the creativity flow.

Katie Doherty and the Navigators discography