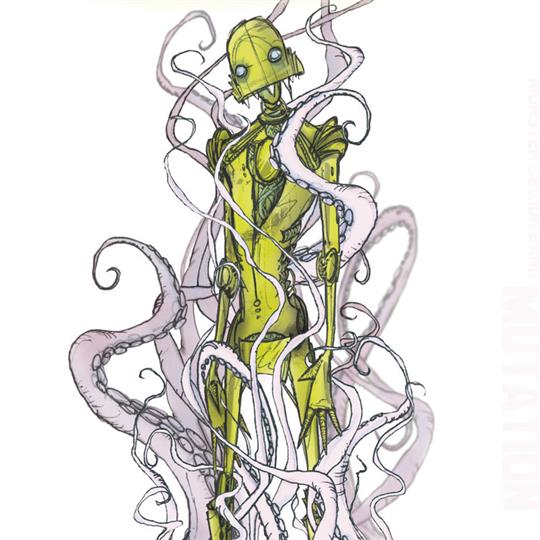 Mutation by Monster Ceilidh Band is an intriguing take on the folk fusion album, combining contemporary dance music with traditional tunes. Although combining folk with electronic instruments has certainly been done by many other artists, it’s much rarer to see those combinations employ explicitly traditional or trad-inspired tunes. Nor for that matter does one often see such clear influences from electronic dance music, as opposed to rock or pop.

The opening track, Venus, starts you off relatively easy with a soaring fiddle melody. When the mandolin, accordion and percussion join in it gets a bit more oomph, but still well within the realms of what you might expect for a trad band. As it progresses however, the percussion slowly switches up, moving from folk to something altogether contemporary, until the synths kick in and it turns fully into a folk melody with a dance bassline.

Purists may well be horrified, but if you’ve an ear for a good beat and a good bassline it mixes surprisingly well.

Venus represents one of the two types of track on the album, where the tune starts off folk and then drops in the more contemporary influences as it goes. The other type jumps in right from the get go.

The next track, Trouser Worrier, is the latter, opening with a pounding bass drum that quickly develops into a proper drum & bass beat, with a half funk, half folk accordion melody running over the top. There’s a real sense as the track progresses of the band channelling more and more of their energy into it, until it descends into a frenzy. It’s a good listen, and no doubt it’s a hell of a lot fun to hear live.

The one track where the gradual introduction of contemporary traits works less well is Mutated Beeswing. It’s a 7:38 epic, but the first 4 minutes or so are a relatively simple fiddle and accordion melody. It’s pleasant enough but there’s not much to it. It picks up when the group introduce percussion and vocal sampling, but it could have benefited from being shorter.

Mutation is a great example of innovation and experimentation on the folk scene, showing that you can bring in the new without abandoning the old. Monster Ceilidh Band don’t let their drum & bass inspired beats overwhelm the tunes or render them unrecognisable. If anything, they could have been even bolder in their experimentation.