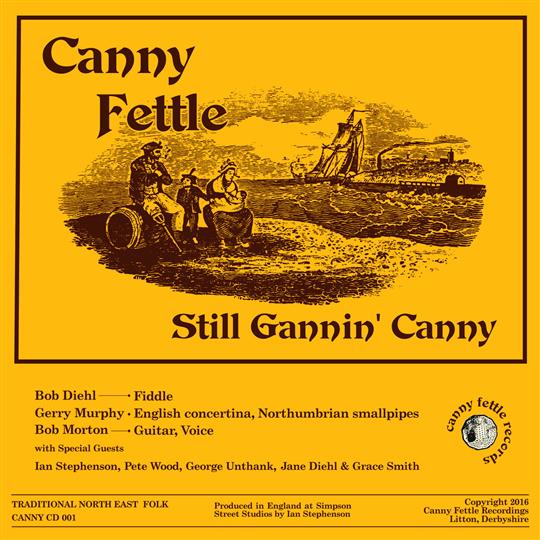 It’s a trifle odd that a band steeped in the Northeast tradition started in Manchester during the late 1960’s when Bob Diehl and Gerry Murphy met whilst attending university. After returning to Humberside they joined forces with Bob Morton and Steve Turner to form Canny Fettle. After two very successful albums they disbanded in the early 1980’s to concentrate on work or, in the case of Turner, a solo career.

Their new album Still Gannin’ Canny offers a selection of new and old songs as a tribute to the musicians who have influenced the band, and also for the joy of the music itself.

This joy is immediately apparent on the first track of the album. The three Scottish tunes presented here are played with a freshness and spontaneity that comes from musicians who have been playing this music for over forty years.

For modern ears the combination of fiddle, concertina and guitar can sound austere and unadorned. However this means that tunes such as Jack’s Gotten a Wife and We Will All Lie Together are left to speak for themselves uncluttered by the bells and whistles of many modern recordings.

There are guests on the album; Ian Stephenson plays piano whilst George Unthank and Peter Wood provide chorus vocals to We’ll Soon Have Work to Dee. The piano turns this song about workers’ rights into a cross between a religious anthem and a drawing room ballad.

Other highlights on this, very generous, album include Bonnie Pit Laddie which gains from Gerry Murphy’s small bagpipe playing and Trip to the Oatelands/Recruiting Officer which is just fun.

Band reunions are always fraught with danger. After 30 years much will have changed, voices may have deepened and fingers may not be as nimble. It’s a tribute to the musicianship of the band that Still Gannin’ Canny sounds like a rediscovered gem from the seventies. Time travel is possible.

Released on Canny Fettle Records in 2016.