Stick In The Wheel - From Here: English Folk Field Recordings 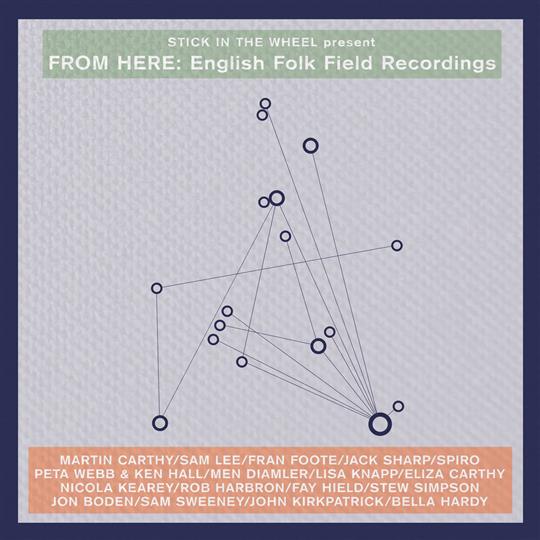 While the opening up of traditional English music to an array of contemporary influences has been a hugely positive thing, there’s arguably less of an emphasis these days on the minute detail of performance. Which may be what inspired lo-fi Londoners Stick In The Wheel to record From Here: English Folk Field Recordings.

Featuring an impressive roll call of English folk notables, this collection of traditional and could-be-traditional material was recorded live and on location with a two-mic setup. And like the early to mid 20th century field recordings which inspired this approach, the immediate and uncluttered nature of these tracks doesn’t indicate a lack of forethought or finesse in their performance.

For instance, Sam Lee’s rendition of The Wild Rover puts a wistful spin on the bar room ballad, not just through his halting delivery, but also his decision to sing it in a key that places it at the deeper end of his range. Similarly, when singing The Ballad of Hugh Stenson, Bella Hardy explores every blue note around the fringes of the melody and every volume from a whisper to a lungful to keep each verse of the lengthy tale fresh and distinctive.

On The Sea, Eliza Carthy wrings a remarkably full bodied and varied accompaniment from her fiddle, with a characteristically earthy vocal take that stands up with the best of the old recordings of Phoebe Smith and Mary Ann Haynes. Just as gutsy is Stew Simpson belting out Eh Aww Ah Cud Hew with such intensity that he must have been left feeling as worn out as the old miner in the song afterwards.

On the instrumental side, Rob Harbron’s set of Young Collins / Getting Up the Stairs on concertina leaves just enough space between the notes to accentuate the well-conceived counterpoint between his two hands. Meanwhile Sam Sweeney showcases the refined simplicity typical of early English dance tunes on his arrangement of Bagpipers / Mount Hills.

For a compilation based around a loose concept, From Here hangs together remarkably well. While each contributor is far from a passive conduit of the material, their voice and style recognisable before you even have time to check the sleeve notes, it’s the source material that does the talking here.

If the aim was to create an album that’s timeless but not old-timey, simple but not unsophisticated, then From Here: English Folk Field Recordings certainly manages that.

Released on CD and download on From Here Records on 17 March 2017.