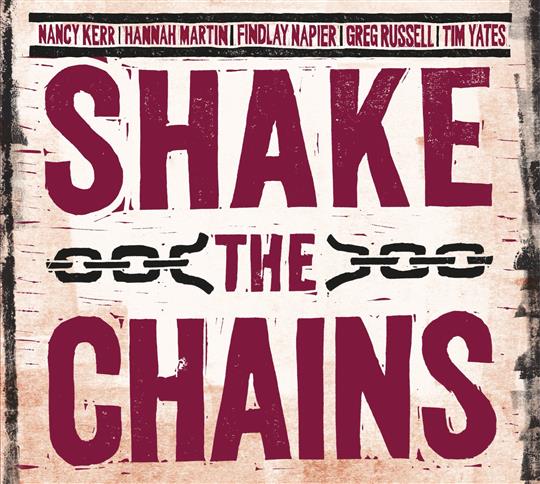 Protest and social comment have long been a feature of the folk idiom, and Shake the Chains continues that tradition.

Commissioned by Folk by the Oak, the album is a mixture of classic and new protest songs written and performed by Greg Russell, Nancy Kerr, Findlay Napier, Hannah Martin and Tim Yates. The songs commemorate and celebrate recent and past triumphs and struggles as well as dealing with contemporary issues.

The album opens in a defiant yet triumphant mood with Through the Trees, written by Nancy Kerr in honour of the women who protested for so long at Greenham Common. The chorus has the anthemic quality of the classic protest song, some of which appear on this album.

Another strong woman appears in the second track, Elizabeth Garrett Anderson, known here by her initials, who was the first woman to qualify as a doctor in this country. Written by Greg Russell, this is another powerful song of defiance.

More up to date issues are dealt with in Hannah Martin’s Yarl’s Wood, a poignant song about the plight of refugees in the notorious immigration centre, their dreams of a new life shattered.

Greg Russell reacts to Nigel Farage’s attitude to foreigners in sarcastic tone with the song Bunch Next Door. Tim Yates’ Side by Side continues this theme, dealing with the problems and richness of multi-cultural communities.

Hannah Martin has a talent for writing particularly moving songs and her Song of the Jay tells of how jays hold funerals for other birds, even those of a different species - a lesson for us all.

There are some glorious moments when the whole ensemble comes together, most notably in Ding Dong Dollar, led by Findlay Napier, and the fitting final track on the album, We Shall Overcome.

Findlay Napier contributes a new song to this genre with Shake the Chains, which quotes from Shelley’s Masque of Anarchy. “we are many, they are few, shake the chains” that has become a popular political slogan in recent times.

Both individually and as an ensemble, the Shake the Chains musicians have created a fine collection of songs of social and political comment that is relevant today.

Released by Quercus Records on 15 September 2017.