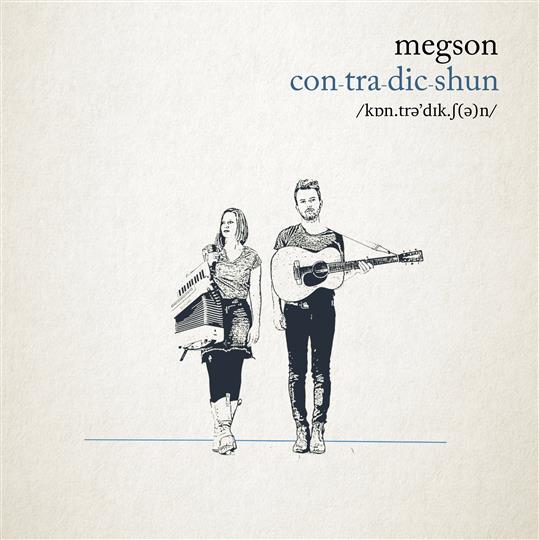 Now firmly established as a fixture on the folk scene, Megson are already onto album number nine. With a mixture of refurbished 19th century broadsides and stories of everyday life in modern Britain, con-tra-dic-shun ploughs a similar furrow to its predecessors.

If that sounds like a simple formula, few do it as well as Stu and Debbie Hanna. From the absolute weariness at the treadmill of adult life on opener Are You Sitting Comfortably to the thoroughly contented A Week Away in the Caravan as they finally make their escape nine tracks later, the album runs the full range of human emotions.

Two Sides in Every Conversation showcases the gentle sense of humour that’s long been a staple of the duo’s writing and gigs, as an old couple struggle to agree on the details of their meeting and marriage. Meanwhile Barrington Judo Club is full of pathos, with yet another breezy Hanna melody that rattles around the brain for days.

The duo show their ability to describe social trends in a sensitive and empathetic way on The New Girl, which draws the parallel between different generations of migrants in their native Teesside, two centuries apart. Dating from the same period when Irish labourers were first heading to Middlesbrough to work, The Voice of the Nation is a full blooded invective about the lack of democratic representation of such industrial new towns.

Close harmony vocals are as much a part of Megson’s signature sound as Stu Hanna’s robust mandola and guitar playing, with the couple’s voices complementing each other brilliantly. Debbie Hanna’s tremulous soprano is more prominent on an ethereal version of I Drew my Ship into the Harbour, while their timing when delivering the alternating lines of The Keach in the Creel is spot on.

All the most winning features of Megson’s work to date are present on con-tra-dic-shun, with music that feels real and relatable whether they’re singing about Victorian Teesside or modern Cambridgeshire. Existing fans will find this album as enjoyable as any of Megson’s previous without being a re-tread, while hopefully those discovering the duo for the first time will want to get stuck into the growing back catalogue.

Released on 8 February 2019 on EDJ Records. Produced by Stu Hanna

1. Are You Sitting Comfortably
2. Contradicshun
3. The New Girl
4. Voice of the Nation
5. Toast: Jackey and Jenny
6. I Drew My Ship into the Harbour
7. Two Sides in Every Conversation
8. The Keach in the Creel
9. Barrington Judo Club
10. A Week Away in the Caravan