Said The Maiden - Of Maids & Mariners 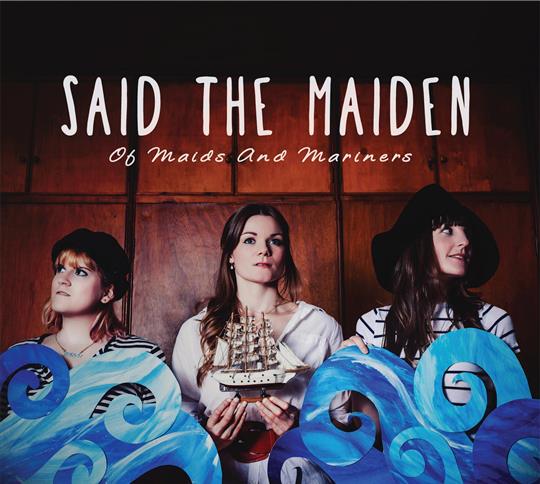 This EP, the third release by Said The Maiden, is a tale of two halves. For your money you get four songs - two studio and two live recordings. Together they present a snapshot in the musical development of this impressive trio.

The studio tracks have been produced by Megson’s Stu Hanna who also provides guitar and mandola accompaniment to the first track on the EP; a lively rendition of The Soldier and the Maiden.

Things take a darker turn with an almost a capella version of Jolene. Apparently a live favourite, this version of Dolly Parton’s classic is slowed down to a crawl, belying its reputation as a jaunty song about a sad subject. If you’re used to the original this might come as a shock but the harmonies are mesmerising and the ending is sublime.

Sung live at Redbourne Folk Club, Spring Tide Rising by Paul and Liz Davenport is a strange, haunting tale about the revenge of a betrayed woman. The song is sung well and the accompaniment, which includes that old folk standby the Shruti box, is near perfect. It’s a shame the chorus is spoiled a little by the audience accompaniment.

The crowd also join in on Polly Can You Swim? This is Said The Maiden’s contribution to that group of songs which has a woman pretending to be a man aboard ship, who is soon unmasked and thrown overboard. Unlike Jolene, this is an upbeat song about a horrible subject. Indeed, Polly herself doesn’t seem to be too upset that she’s going to drown. At least she dies singing a catchy chorus. It’s all good fun.

Of Maids and Mariners is a delightful introduction to a talented trio and is sure to be welcomed by fans and folkies alike.