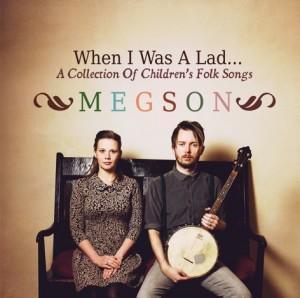 Megson’s new album, When I was a Lad, is a collection of children’s folk songs, drawn from a range of traditional collections and including a couple of self-penned pieces.

The opening song, Bee-O, is a lilting Yorkshire lullabye, celebrating the love of children, sung sweetly by Debbie accompanied by Stu on mandolin.

The song that follows, All the Shops Have Fallen Down, was written by Stu and Debbie. It sits musically and thematically in a long folk tradition, mourning the demise of the community and the decline of local shops - bakery, butchery and hosiery. It is a well-composed and vigorously executed example of modern traditional folk music, with entertaining lyrics - talking about a pair of tights, ’the legs were full of fleas and mites’. Some great singing here from Stu along with acoustic accompaniment.

Jenny Jenkins showcases Debbie’s pure voice accompanied by banjo. It is a gentle courtship song from America, found in a song book compiled by Moses Asch in 1964. Oats and Beans and Barley Grow, a rousing song by Stu, follows, evoking the flavour of a country fair. A play song, it was published in a lovely illustrated book, Children’s Singing Games in 1894.

The well-known The Riddle Song, dating back to the 15th century and later collected by Sharp and Karpeles, is a well-positioned interlude, this time with Stu and Debbie sharing the vocals. Their poignant rendition stands out on the album as one of its most moving moments.

It’s followed by a jolly song, My Fathers Farm, reflecting the album’s animals theme. Next comes Dance to Your Daddy, a song popularised through television advertisements, but Debbie and Stu’s version is loyal to the original Newcastle version by W Watson in 1840.

Baby and the Band is an amusing original song about a family who all play instruments, including the baby who plays the banjo. It features some noteworthy melodeon playing by Ollie King. The song comes from Alison McMorland’s collection of rhymes, songs and games for children called appropriately The Funny Family.

Leatherwing Bat, also known as The Bird’s Courting Song or The Hawk and The Crow, tells the story of the various courting expeditions of different birds. Another traditional song, A Frog he Would A-Wooing Go, keeps up the flavour of children’s lullabyes and nursery songs.

The album ends with Five Little Ducks, a feel-good story, which has the sound of a lively tale but the direction of a tragedy until the turn-around in the last verse which lets the album end on a high note.

When I was a Lad brings Megson’s natural humour, energy and their strong connection with folk music to this niche area of children’s songs, to pleasing effect.