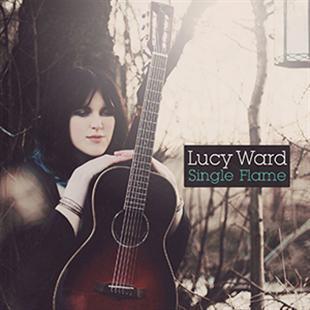 Single Flame is Lucy Ward’s much anticipated second album, finally released after the huge buzz generated from her first album Adelphi has to Fly back in 2011. Ward is widely considered one of the new age folk musicians hitting the highest bar there is.

This second album does not disappoint at all. It breaks out straight away with a mesmerising song called I Cannot Say I Will Not Speak, which gives us a slow boom of her voice backed by guitars, vocals and percussion. The track very much sets the level for the whole album, presenting us early on a full of idea of how the album will sound.

This kind of modernised folk occurs throughout the whole album, appearing again particularly well during The Last Pirourette which adds some talented fiddle skills into the bubbling musical soup.

We get a very interesting modernisation of traditional folk ideas, which although firmly in traditional roots, does stretch beyond this genre into a new musical arrangement. The tracks Honey and Velvet Sky are a lot less rock than the first track. Instead of a large accompaniment, we get a soft guitar strumming and gentle, soothing vocals, showing that Ward is capable of a variety of different styles but can still keep them connected where it is important.

As well as the music, we do get an array of artistic lyrics, particularly in Icarus and Lord I Don’t Want to Die in the Storm, Ward’s voice acting like a brush on canvas.

We also get faster paced foot tapping music in the form of Marching through the Green Grass which gives us a brilliant combination of rock and folk just to add a little extra spark into the album and surprise the listeners after a couple of softer tracks.

The album closes more gentle songs: Ink and Shellback give us a final taste of Ward’s vocals to soft strumming, to bring the album to a close with a nice bow.