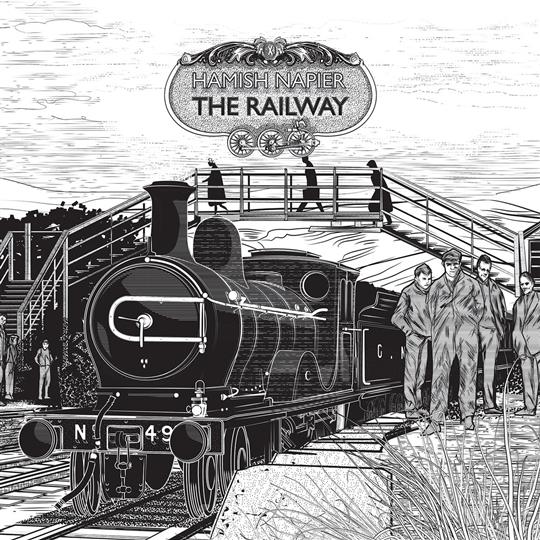 From the Moray Coast to the heart of the Scottish Highlands on the edge of the Grampian Mountains; this was the route of the old Speyside Line. A landmark that provided the inspiration for the second part of Scottish multi-instrumentalist Hamish Napier’s pentalogy about the valley he grew up in: The Railway portrays the images, the stories and the characters connected to the railway and its socioeconomic impact.

Following the sound of a departing steam train, a gentle piano introduction welcomes the listener before Hamish Napier’s flute and Patsy Reid’s strings enter driving the whole ensemble for the majestic The Speyside Line, the first stage of this evocative musical journey. The Napier brothers carry the chorus of Jocky the Mole, a song about a slightly reckless train driver, and a powerful declaration of love to the old trains, clearly delivered in the lines “fire and water, smoke and steam - a train is like a living thing”.

But time doesn’t stop and the steam trains became obsolete. Diesel, a sparkling track led by Ross Ainslie’s pipes, represents the shift to a more advanced fuelling system and the start of a new chapter for the Speyside line. The album closes with The Railwayman, an effervescent suite of three tracks: it starts with an airy tin whistle led tune that develops, involving the entire lineup, into a dynamic series of strathspeys plus a reel, the latter fading into the initial tune for a solemn conclusion.

As the railway line follows the Spey, this album walks in the steps of Napier’s previous one, The River; but a more mature and distinctive style and a more complex architecture of harmonies emerge, making The Railway an even more enjoyable listen.

Napier has successfully undertaken a complex study that does not involve only instrumental music. Take for example the lyrics of The World Came in by Rail, where his storytelling talent is not only reflected in the soft arrangement, but also in the precise and almost scientific choice of the images the lyrics depict.

The Railway stands up next to more established train-related albums, especially ones from North America, and is more than equal to them. Knowing this is only the second instalment of his pentalogy, with the following albums to be released between 2020 and 2024, we cannot wait to be taken again to Napier’s native valley to taste again its atmosphere thanks to his inventive and evocative compositions.

Released on CD and digitally on Bandcamp on 3 August 2018, produced by Andrea Gobbi.