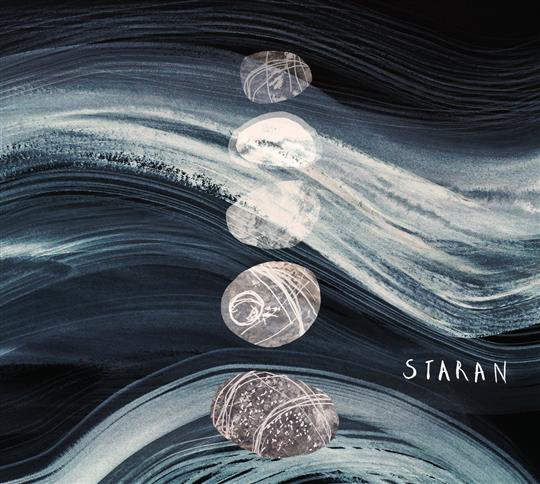 If you like your folk music to be intimate, with traditional-leaning melodic work, then there’s a lot to like in the new, self titled album by Scottish folk act Staran. Comprised of Kim Carnie (vocals), John Lowrie (Piano, Harmonium, Rhodes, Percussion), Innes White (Guitars and Mandolin), James Lindsay (Double Bass) and Jack Smedley (Fiddle), with some additional backing vocals from Megan Henderson, Staran is a project that is clearly informed by Scottish traditional folk, with the occasional dashes of more modern influences like contemporary ambient music and jazz.

One of the central unifying aspects of the band’s sound, found throughout the album, is
how the music builds on itself; cosy, delicate intros that build steadily with rich layers of harmony and melody. Everything about the album’s musical direction feels very deliberate, and no track rushes unnecessarily to its climax, simply taking the appropriate time to really make its existence felt.

Kim Carnie’s poetic grasp of Gaelic is on full show in this album, and her vocal presence,
combined with the fairytale quality of the language makes the opening track, Dà Làimh Sa Phìob, a perfect statement for the album as a whole. Slowly evolving, with strong emphasis on melody, it is somehow both understated and grand all at once. Also featuring some touching, intimate fiddle work, this track acts as a perfect bell-weather for the listener’s overall feelings surrounding the album.

Other particularly notable tracks include Back To Glasgow, which follows a traditional
instrumental structure, with a slower, more lyrical first half and a stirring, jig-like second half. Traditionalists will find much to love with this tune.

Little Waves gives Innes White a chance to shine brightly, with very sweet mandolin playing featuring strongly throughout, and Settle Honey, is where the jazz influences are more keenly felt. This slow ballad is underpinned by excellent harmony on the piano and serves as an excellent closing track to an album that clearly likes to poke at the boundary between the traditional and the new.

In short, Staran feels like sitting around a campfire in a winter forest: warm, atmospheric
and ethereal. There’s a good chance you’ll hear something that you’ve never heard before from a folk album. If that interests you, then pick it up whenever you can.