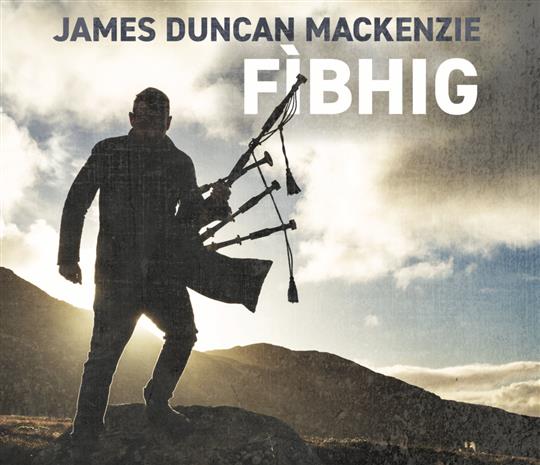 Conceived whilst in lockdown and recorded from home with a line up including, among many others, Innes White and Luc McNally, the new album by acclaimed piper, wooden flute and whistle player James Duncan Mackenzie is a celebration of the places, the atmospheres, the people and the lifestyle of the Hebrides.

The trademark Great Highland bagpipe playing of this artist is immediately introduced in the first track Ian’s Last Munro which starts with a tune named after Mackenzie’s house on the Isle of Lewis. It is followed by the title track, an evocative wooden flute led tune gradually performed by the whole ensemble, with all the guest musicians joining in for a stunning climax.

Katie Mackenzie is, just like the vast majority of the tracks in the second half of the album, driven by Mackenzie’s sublime piping, whilst Harbour Master and the Archivist and The Breasclete Monkey are beautifully crafted sets of woodwind centred tunes.

The second part of the album starts with the jolly Old Blind Dog and the diverse John and Jill’s Welcome. It also includes Solo Pipe Marches, an exquisite sample of dexterity and competition style playing. The album rounds off with a song, the airy Gun Eirich Sinn Fhathast, delivered by Katie and James Duncan Mackenzie on a delicate arrangement.

Despite being not as adventurous as his previous album Sromos, Fibhig is surely an enticing musical experience. With this work, Mackenzie seems to go back to his musical roots, mostly focusing on the pipes, transposing sensations and stories of island life into music with his recognisable touch.

About three quarters of the album is made up of fast-paced tunes, and yet the overall result is a serene and colourful picture of locations and stories from those isles, a portrait in which every member of the band has their own voice whilst putting Mackenzie’s descriptive talent under the spotlight.

Fibhig is a perfect escape from our turbulent world and a new jewel in James Duncan Mackenzie’s crown of musical king of the Hebrides, a highly recommended release that will allow many people to travel from their own living room to these remote outskirts of the British Isles and to appreciate their uniqueness.