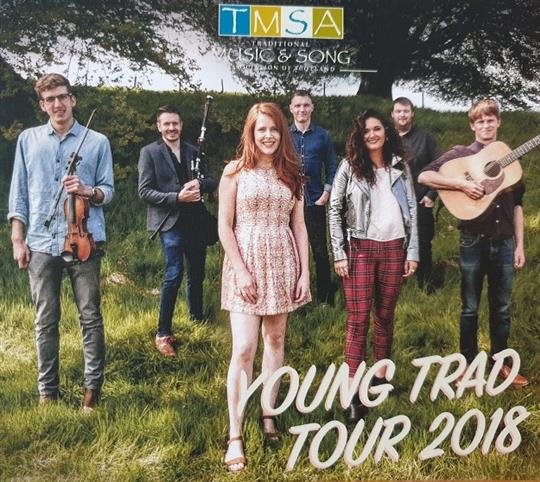 The finalists of the 2018 Scottish Young Trad Awards, Hanna Rarity, Dave Shedden, Amy Papiransky, Luc McNally, Ali Levack and Rory Matheson, with the 2017 winner Charlie Stewart, recorded a ten track album with both traditional and self-penned material to celebrate the rich musical heritage they grew up in.

In Tae the Beggin’ the voices of both the singers on this album alternate with each other on an original fiddle and piano accompaniment. The Dancer’s Delight and The Mathematician are two lively tracks respectively led by McNally’s guitar and Matheson’s piano. In the latter, the flying fingers of the Sutherland lad display an astonishing level of virtuosity, showing that piano can be a folk instrument alongside more established alternatives.

Woodlands Drive is a track led by Levack’s low whistle in which the band gradually joins a delicate but highly ornamented set. Shedden’s skilled piping drives an enthusiastic final track: Picnic in the Sky features a powerful change of mood, entering into a sublime fast-paced reel, although the accompaniment by the other instrumentalists is equally remarkable and sparkling.

These young musicians have perfectly set up some engaging and sophisticated arrangements, effortlessly embedding the lyrics. An example of this refined musical sensibility is The Rothes Colliery in which both Rarity and Papiransky perform at their best with some crisp whistle work by Levack.

A foot in the past, but with a forward looking glance, this is the perfect summary of a unique album by seven musicians that, despite their young age, are already well-established figures of British folk scene, heading for success and new horizons.

Released on CD and digitally on 6 August 2019 by TMSA