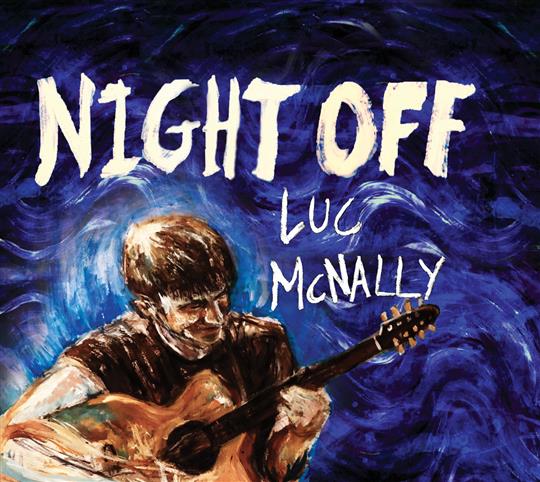 County Durham guitarist and singer Luc McNally has just released his long awaited first solo album Night Off, a diverse collection of traditional tunes and old songs from Britain, Ireland and North America plus some original compositions, all arranged in his individual style with a line up including, among many others, Charlie Stewart and Graham Rorie.

McNally’s voice is catchy and versatile: the material on this album displays that he can turn his hand to every type of song as proved by the poignant a cappella version of The Beast in which he performs all the voices and by the lively Church Street Blues.

Nevertheless, it is in the instrumental tracks that this young and talented musician highlights all his technical skills, demonstrating a veteran’s musical sensibility. His touch is delicate in the gentle Borrowed Hat, nimble in the endearing Private Beach and simply sublime in the longest track, Aye? / Mother’s Delight / The Inspection Platform, a seven minute long set including a tribute to Martin Bennett, a traditional tune and a self-penned composition.

McNally’s distinctive flatpicking and a sympathetic instrumentation are twinned with a deep knowledge and understanding of traditional sources: see for example the perfect juxtaposition of Fly We to Some Desert Isle, a song by Scottish poet Robert Tannahill (1774-1810), on an even older folk theme, a gorgeous example of why the traditional music of these isles is not a static subject but an always evolving multiverse.

Night Off is an album of profound imagination and character, partly because of the great variety of expressions and feelings that it recalls, but mostly thanks to McNally’s ability to make modern material sound timeless, and at the same time to refresh ancient sources. Certainly after finishing the album one wishes it lasted a few tracks more, but it is still an excellent and highly recommended treat for the ears of every guitarist and folk music aficionado.

Released on CD and digitally on 20 March 2020 by Birnam CD, Produced by Graham Rorie and Luc McNally.