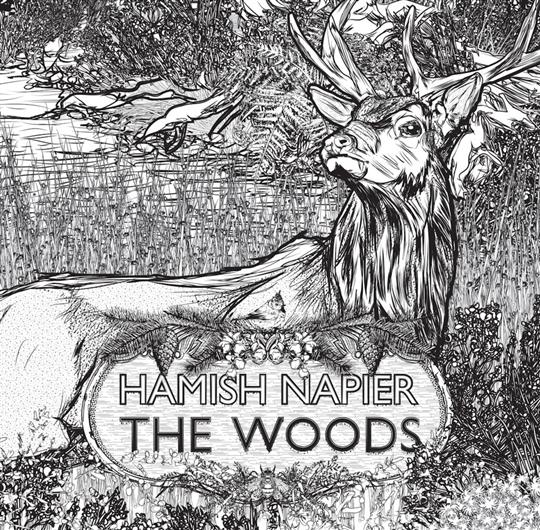 The Woods is the third step of Scottish multi-instrumentalist and composer Hamish Napier’s pentalogy on the valley he grew up in. After concentrating on the River Spey and on the old Speyside Railway and the stories that surround them, Napier explores the atmosphere of the forests and their inhabitants with a large body of original material, accompanied by great names of folk music such as Ross Ainslie, Innes Watson and Jarlath Henderson.

Many of the tracks have been directly inspired by the trees related to Ogham, the early medieval Gaelic tree alphabet. Great examples of those are The Wildfire, a musical warning against these very current disasters, and The Capercaillie Rant / An Taghan and The Tree of Life / The Lightning Tree, two energetic tin whistle and pipe duets enveloped in rich and dynamic arrangements. Another striking track is The Tree of Blessing, a stunning sample of Napier’s exquisite piano technique and a short and powerful tribute to this hardy evergreen shrub.

The Highest Willows is the only song on this album: it is delivered by Calum MacCrimmon’s voice in a ceol mòr style following Napier’s flute before the entire line up joins in leading to a spirited change of pace. The last track of the album is a brief recording of the sound of male Capercaillie displaying for the females in the pinewoods, a surprising conclusion.

The Woods naturally flows for one hour and six minutes through the many diverse images it evokes: just like the alternation of the seasons’ colours in the forest, lively modern sounding tracks such as Forest Folk and classical influenced tunes like The Tree of Wisdom follow each other, creating an even more multifaceted album than Napier’s previous ones.

An enveloping sense of mysticism is perceptible throughout the album, chiefly in the bright opening track The Pioneer and in the gloomy The Tree of Underworld, and this feeling is emphasised by the subtlety of the settings, especially the ones in which Jarlath Henderson’s uilleann pipes provide a juxtaposed contribution.

This is an epic album in so many ways: twenty-one tracks, a stellar line-up and a beautiful booklet with detailed information about the trees and the related elements of the Gaelic tree alphabet are just some of the ingredients for an exciting and immersive musical adventure.

Released on CD and digitally on Bandcamp on 20 March 2020, produced by Andrea Gobi and Hamish Napier.