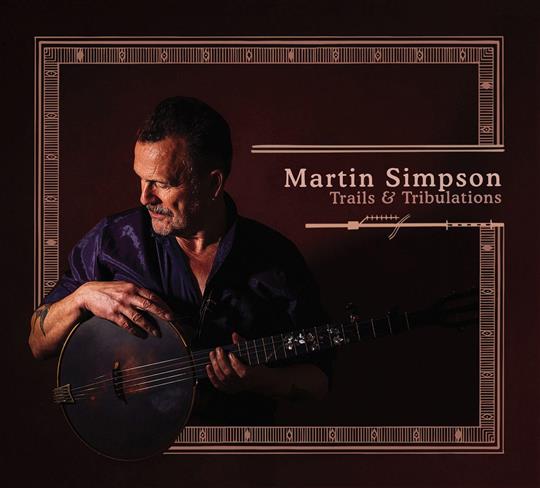 Martin Simpson hits an introspective note in his 20th solo album Trails and Tribulations. Collecting together a variety of songs traditional and new, Simpson reflects on a traveling life, the inspiration discovered, and challenges encountered.

Simpson travels not just in subject but musically, playing a variety of guitars in a variety of styles. Trails and Tribulations also benefits from guest appearances from the likes of Nancy Kerr and Andy Cutting.

It will come as no surprise that Simpson’s musicianship is excellent. Simpson plays with an exact precision that always sound heartfelt. The fingerpicking is quick without ever feeling rushed.

Trails run throughout the album. Blues Run the Game, a cover describing the struggles of life on the road, has a certain rebellious acceptance of life’s shortcomings. Bones and Feathers, leaves a strange and lasting impression on you. There is a strange, beauty to the song’s description of a ghostly old lady who, it appears, resurrects dead birds.

Described as if he happened upon her after walking back from a gig one day, Simpson makes the fantastical subject matter seem almost plausible. You can’t help getting more drawn in on each listen imaging that this time you’ll find something new. The song haunts you as if you’re the central character of a Lovecraft novella.

A Ballad For Katherine Of Aragon, and Maps meditate on war, responsible for causing the travel of many young men. Maps is an exquisite reflection that our travel can often make us consider where we came from; the starting location defines a trip as much as a destination.

Maps leads easily into Simpson’s version of St. James Hospital, on which he meets an old comrade, close to death. It’s easy to imagine Simpson returning home to meet an old acquaintance by chance. A poignant reminder that when we leave, life at home continues without us. Jasper’s / Dancing Shoes, suggests a similar notion, pointing out that you can return from travel to find that life has left you behind.

Ridgeway brings us home reminding us that those who travel do so through the lives and homes of others, on which they still have an impact.