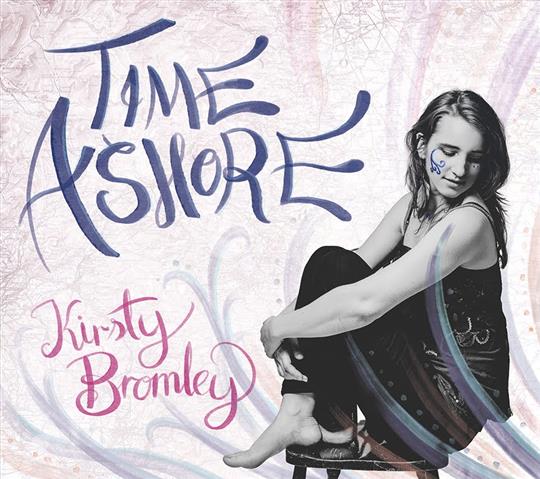 Kirsty Bromley is a young Sheffield-based singer with a beautiful clear voice, and one that’s perfectly suited to make a real impact on the contemporary folk scene. Time Ashore is her debut album.

It opens with Caught Upon a Breeze. Self-penned by Bromley, the song describes her reflections on that moment in life when it’s time to flee the family nest. “I’ll spread my wings to catch the wind and fly away to my future” she sings. Tender and poignant, it’s sung unaccompanied and acts as a superb introduction to both her vocal and song-writing skills.

That is not to say, however, that there is not also some lovely instrumentation on this album, too. Second track, Valley Song, is a stunning piano and vocal track, again written by Bromley, this time with co-writer Grace Kaya. A very strong team of musicians has been put together for this album and as it progresses we are treated to a wide and varied range of musicians and instruments, including guitar, fiddle, cello, double bass, flute, whistle, accordion and melodeon.

The self-written material is complemented by beautiful arrangements of traditional songs, like Twas on One April Morning and Eat Drink & Be Jolly, as well as some well-chosen cover versions, including Joni Mitchell’s Circle Game, which appears as a bonus track.

The title track, Time Ashore, is one of the real highlights of this fine album. Written by Bill Meek, it tells of a young woman standing on the dockside saying farewell to her lover as his time ashore draws to a close, and is a good example of why Bromley not only sings with great beauty but is an empathetic storyteller too.

Kirsty Bromley has given us a strong debut with a fine collection of songs, both new and old, some very beautiful singing and excellent accompanying musicianship. She is someone we’ll be hearing a lot more of, and deservedly so.