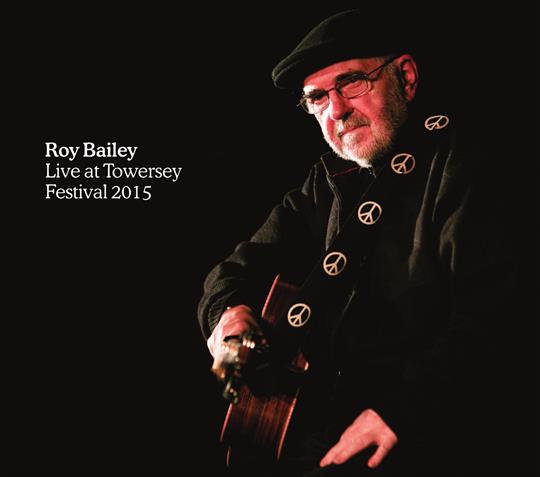 Roy Bailey is the loveliest man in folk. This is an indisputable fact. His regular slot at Towersey Festival is always one of the highlights of the festival, and regular attendees will know why. For the first time however, he has recorded his performance and released it as Live At Towersey Festival 2015.

Bailey’s performance is a unique mix of his fire for justice, his gentle wit and his warmth. Many live albums ultimately amount to a regular album with applause in between the tracks, but Bailey never disengages from his audience. Some of the best tracks are those when the audience is singing along full pelt, particularly on the emotive finale, Rolling Home.

At the time of recording, Bailey was 79, but when he’s singing about what he so clearly believes in, his voice is as strong as it has ever been. What You Do With What You’ve Got is a call for justice and courage instead of selfishness. It’s a relatively simple song, but a catchy guitar riff is all that’s needed to underline Bailey’s (and the audience’s) passionate delivery.

In the other direction, and reflecting Bailey’s past releases aimed at children, he sings about the things one can find in Molly’s Garden. He’s joined by his granddaughter (and presumably future folk-star), the eponymous Molly, as well as his daughter Kit and son-in-law, the relatively unknown Martin Simpson (yes that Martin Simpson). Some will turn up their noses at a children’s song on a ’proper’ album, but the bouncy sing-along is infectious fun.

In further contrast, Home By Christmas / Empty Chair / Home By Christmas consists of two songs by Robb Johnson, split into three parts. The first, Home by Christmas is told from the point of view a soldier departing for Flanders in the great war. Andy Cutting’s accompaniment on melodeon is eerie and affecting, though it doesn’t truly hit home until it is revisited again after the bitter-sweet love song Empty Chair. When Bailey and Cutting return to Home by Christmas, it initially appears to be returning to its original subject matter, the eventual reveal that Bailey is singing about a veteran of Afghanistan is disquieting.

Live At Towersey Festival 2015 is almost a summary of Bailey’s career, from protest, to children’s songs, to lamentation, with a handful of folk’s finest joining in. It’s an album of excellent songs by an excellent artist. But then, if you’ve ever seen him perform at Towersey, you’ll already know that.