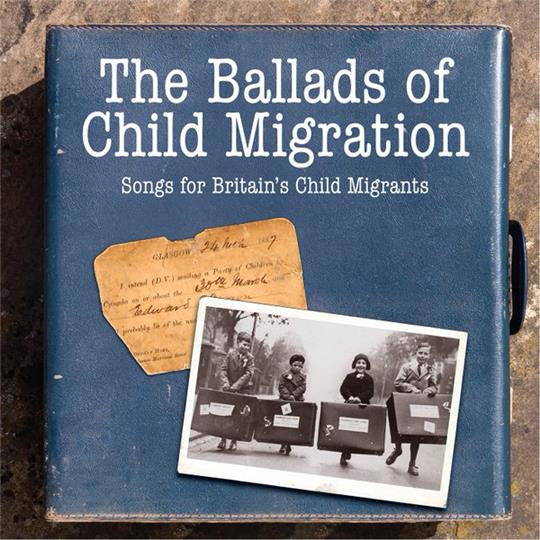 The story of forced child migration from Britain to the empire is, in many cases, a tragic one. Between 1869 and 1970, some 100,000 children were sent overseas, the majority to Canada, often away from families they would never see again. Although the aim was charitable - to allow these children to escape the poverty of their British lives - many child migrants remember a traumatic separation followed by miserable, abusive childhoods on the other side of the world. The Ballads of Child Migration is a collection of songs from some of Britain’s foremost folk musicians, aiming to commemorate and keep alive the stories of these children, and coincides with an exhibition at the V&A Museum.

The album opens with a Julie Matthews composition, Small Case Full of Big Dreams, performed with fellow ex-Albion Band member Chris While. Matthews’ gorgeous, pure vocal, beautiful lyric and heart-wrenching melody really set the tone for all the While & Matthews contributions to this collection, which also includes the heart-breaking Devil’s Heart. This is a rebuttal of the hymn Whither Pilgrims Are You Going, which talks of migration as journeying closer to God and was used as propaganda for the migration schemes. A version of Whither Pilgrims immediately precedes Devil’s Heart on this album.

A complete contrast is offered by the contributions of Jez Lowe. The Durham-based singer offers four numbers, the highlight of which is Snow to Nova Scotia, an upbeat yet wistful account of the misplaced hope of the migrants, with a delightfully witty, albeit tragic, lyric. Landfall is similarly optimistic, lifted by the harmony vocals added by the excellent Coope, Boyes & Simpson.

Another real highlight of the album is an instrumental by Scottish folk veteran John McCusker, entitled Leaving All We Know. Featuring a mournful, lilting fiddle melody from McCusker, and also the button accordion playing of the legendary Andy Cutting, this instrumental is as expressive as any of the vocal numbers on this album. There are also two numbers from songwriter Boo Hewerdine, whose thoughtful, delicate contributions highlight the strangeness and unfamiliarity of foreign climbs.

The album perhaps saves its most glittering gem until last. The wonderful Yorkshire duo O’Hooley & Tidow, who have written on this topic before in the form of the fabulous Two Mothers from their 2014 album The Hum, close the collection with a beautiful setting of Why Did I Leave Thee?, an ode to his native England by Canadian migrant Freddie Henderson. Their gorgeous harmonies and moving melody, combined with Henderson’s grieving words, are a fitting end to this most poignant of albums.

Overall, it is impossible to listen to The Ballads of Child Migration without being deeply affected by the tales of the migrants. This is a very fine collection featuring some of the most talented musicians around, and it is certainly a fitting tribute to the oft-forgotten victims of child migration.

Released on Delphonic Music on 9 October 2015