Various Artists - Joy of Living - A Tribute to Ewan MacColl 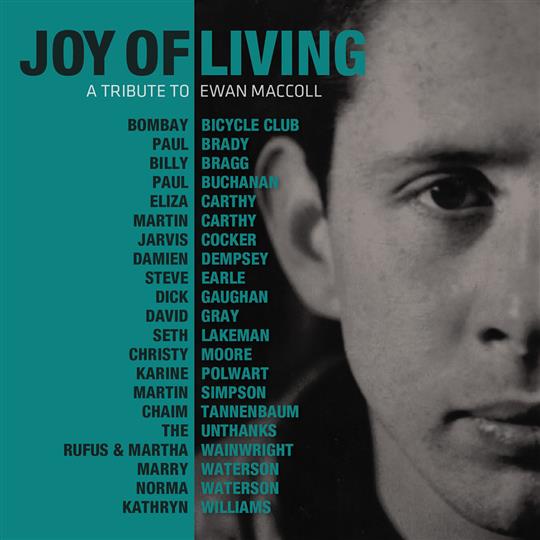 Joy of Living has been produced by Ewan MacColl’s sons Calum and Neill and released to mark the centenary of his birth. It brings together a wide range of musicians from the British Isles and beyond, each putting their own individual stamp on one of MacColl’s songs.

No MacColl tribute album would be complete without classics like Dirty Old Town (sung here by American Steve Earle), The First Time Ever I Saw Your Face (sung here by Scotsman Paul Buchanan) and the Joy of Living (Indie singer David Gray).

Mixed in with the “hits” are other lesser-known songs given individual treatment by an interesting range of artists, ranging from English folk “royalty” like the Waterson-Carthy dynasty, to younger artists like the Unthanks, Karine Polwart and Seth Lakeman. Other folk artists include Irish singers Christy Moore, Damien Dempsey, and Scot Dick Gaughan. From further afield we can hear Rufus and Martha Wainwright (Canada/USA), and Chaim Tannenbaum and Steve Earle (USA). From the more mainstream/indie music world we have Jarvis Cocker, David Gray, and Jack Steadman & Jamie MacColl from Bombay Bicycle Club.

MacColl wrote songs about people with “real” jobs but very much in the idiom of traditional folk song. Martin Carthy’s distinctive guitar playing features on Champion At Keeping ’Em Rolling which tells of the experiences of a long distance lorry driver, while the Unthanks’ breathy rendition of Cannily, Cannily is a lullaby for the child of a train driver.

Political views are very much in evidence in songs portraying the plight of travellers - Eliza Carthy gives a rousing version of Thirty Foot Trailer, lamenting the loss of the travelling way of life, its language and culture. In sharp contrast, her mother Norma Waterson sings Moving On Song in a manner which suggests the travellers are tired of being moved on, but just accept it is something they have to do.

Linked to these songs is one of the highlights of the album, The Terror Time, sung here by Scottish singer-songwriter Karine Polwart. Like The Thirty Foot Trailer this song was written for the Radio Ballads. Karine’s version is haunting and atmospheric, becoming very dramatic towards the end.

Other political songs deal with the theme of war, namely Jamie Foyers and The Compañeros, sung by Dick Gaughan and Christy Moore respectively. The former deals with the story of a young man killed in the Spanish Civil War and the waste of youth in such conflicts, while the latter talks of the comradeship of men fighting alongside Che Guevara.

There was a softer side to MacColl too. This is evident in his beautiful song of love won and lost Sweet Thames Flow Softly, sung here by Rufus and Martha Wainwright. Also in the title track Joy of Living, where a man is at the end of his life, saying goodbye to his loved ones and favourite places.

A particular highlight is The Young Birds sung here by Jack Steadman & Jamie MacColl of Bombay Bicycle Club. This tragic song about the deaths of 34 London schoolboys in a plane crash in 1961 is made to sound like an old, scratched record. The harmonies are simply and beautifully executed. Jamie is MacColl’s grandson making him a most appropriate contributor to this album.

This album demonstrates the huge variety in Ewan MacColl’s songwriting. The range of artists will no doubt attract interest from a wider field of listeners and may introduce many new people to the vast oeuvre of Ewan McColl.