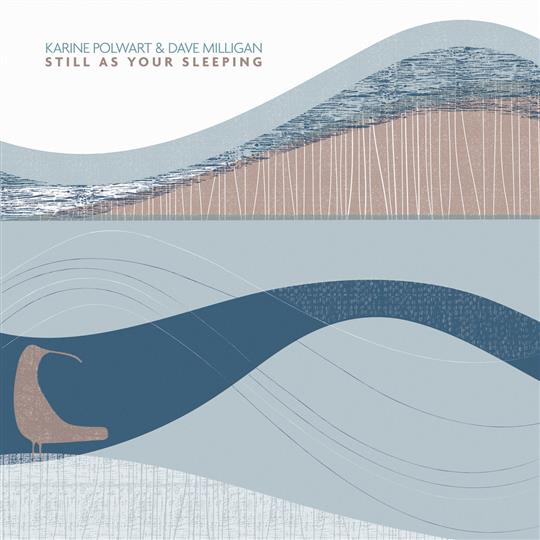 The highly acclaimed, award-winning Edinburgh-based singer Karine Polwart joins forces with her jazz musician Midlothian neighbour Dave Milligan for this stripped back album of original, traditional and covers that, with the exception of one guest vocal, features just her voice and his piano.

It opens on the softly sung Craigie Hill, an emigrant’s farewell song learnt from Dick Gaughan’s Handful of Earth album, he, in turn, having learnt it from Glasgow-born Irish singer, Paddy Tunney. It arrived fortuitously on the day before the funeral of her grandfather, Peter Quinn, a Leith native who had settled in the Craigie district of Ayr when her mother was just ten, and it seemed only fitting to become part of the album’s musical weave. It perfectly sets the tone and scene for her wistful, reflective take on Michael Marra’s Heaven’s Hound that follows, accompanied by light piano touches.

Introduced by and set to simple, single notes, dedicated to her fellow Pathhead residents and born of the community pulling together during the pandemic, The Path That Winds Before Us speaks of better days ahead and having faith in the future as, drawing on farming imagery, she sings “Don’t worry, don’t hurry/The seed will take its time to grow/Don’t worry, don’t hurry/Prepare the earth and sow…One step and then another is the only place we have to go”.

It’s back then to a traditional Scottish evergreen for a lovely, quietly tender reading of The Parting Glass, a song about friend and family, love and loss that she’d previously recorded as a Radio 4 Today commission at the request of Margaret Atwood in memory of her late husband. The first of two relatively contemporary covers comes with Old Men of the Shells, Alasdair Roberts’ softly melancholic song about the siren call of the sea, the tune adapted from the Irish traditional The Verdant Braes of Screen and the title borrowed from an old Scottish Highland pipes pibroch, a fragment of which is echoed in Milligan’s pulsing mid-song interlude.

It’s followed by her hushedly sung contribution to the catalogue of Richard Fariña’s much covered The Quiet Joys of Brotherhood, Milligan ingeniously using the inside of the piano to create a pizzicato string sound and percussive tribal rhythm.

The second of their writing collaborations, the six-minute Siccar Point is another number that also showcases their inventive creativity. Part spoken poetry, part sung with fragmentary backing, it’s titled for the two rock formations in the Scottish Borders discovered in 1788 by geologist Sir James Hall, mathematician John Playfair, and James Hutton, father of modern geology, that represent a geological time gap of 65 million years and gave rise to the concept of Deep Time and the understanding that nothing is certain and that “Only one thing is sure. Everything dissolves and disappears”, as captured in the way it ends with the tentative piano notes fading away.

Opening with Milligan’s piano frills, the remaining cover is a beautifully understated, folk-dusted interpretation of Kate McGarrigle’s yearningly bittersweet Talk To Me Of Mendocino. This leads to the solo-penned, Celtic mist-infused Travel These Ways, Stephen Deazley adding vocals to a song commissioned by Luminate, Scotland’s creative ageing organisation, for their Dementia Singing Network, the lyrics of which speak once more of connection, care and community as she sings “Wherever we go/Wherever we bide/We’ll travel these ways together” and “When the haar comes rolling in/And you can’t see your way in to harbour/I’ll heave the boat to til the sun clears the sky and it’s safe once again to weigh anchor”.

It ends, fittingly, with a parting song, turning to Robert Burns’s much covered Ae Fond Kiss, the musical chemistry between the duo affording it a new poignant dimension, a closing echo of the emotional thread they have woven throughout this simple but beguiling and life-affirming lullaby of a project. They should pop round each other’s place more often.

Released on CD, LP and digitally on Hudson Records October 1 2021.

1. Craigie Hill
2. Heaven’s Hound
3. The Path That Winds Before Us
4. The Parting Glass
5. The Old Men of the Shells
6. The Quiet Joys of Brotherhood
7. Siccar Point
8. Talk to me of Mendocino
9. Travel These Ways
10. Ae Fond Kiss