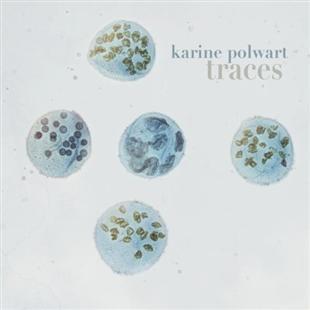 Karine Polwart’s fifth release Traces is a collection of self-penned songs whose inspirations draw from Donald Trump’s building project, Charles Darwin, and the murder of the schoolgirl Susan Maxwell. It is thematically dark but the sound is reflective and delicate.

Polwart’s voice is Traces main attraction. That should in no way be taken as a slight on the instrumentation and the wonderful musicians who add so much to the album. Her voice is soaring and beautiful, and the instrumentation is intended to act as a fragile and delicate foil. It is a beautiful album whose reliance is on a striking voice which was always meant to steal the show.

The spine tingling vocals are such that it would be impossible to create a party atmosphere, not that I for one second think that was Polwart’s intention on this release. However it means that the whole album has a slow, and soothing atmosphere about it, as the simplicity of arrangement only allows the exposure of one facet of the instrumentation at a time.

King of Birds is a favourite on this beautiful and poignant album. It showcases Polwart’s fragile harmonies and light vocals; it has a fairytale feel to it. Not to diminish its serious magnificence - but it would not sound out of place on a Disney soundtrack. We’re all leaving is another stand-out track, a number which considers Charles Darwin’s family life. It creates a sense of a majestic journey through the build up of sound.

There is one minor complaint. There are occasions when the same phrase or note are repeated innumerably, and the effect of this I am sure is meant to be an emphasis of the poignancy of the moment, but in reality it just grated - which meant that sometimes a fantastically atmospheric track sometimes lapsed into a vaguely annoying one.

This is not an album to motivate anyone. It is slow moving and gentle. It is an album to sit and listen to on a Sunday afternoon in the sun. It is a wonderful and fresh set of songs which lead to a definite release of tension by providing a sublimely relaxing atmosphere.