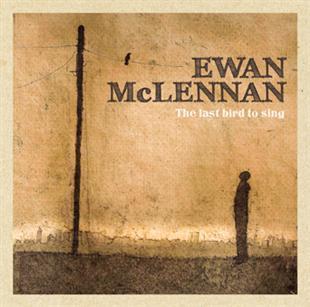 Ewan McLennan’s second album brings together songs which champion the downtrodden, along with those expressing nostalgia for his homeland, punctuated with some dazzling instrumentals. The tracks are an almost even mix of traditional songs, covers and self-penned material.

He has an impressive collection of guest musicians in Karine Polwart (harmony vocal), John McCusker (fiddle), Martin Simpson (slide guitar), and Laurence Blackadder (double bass). Ewan doesn’t put all of these together to form a folk supergroup, but uses their talents sparingly to enhance his own performances.

Although much of the album is quite melancholy in tone, the opening song is an upbeat longing to be back in the borders - a cover of Matt McGinn’s Rolling Hills of the Borders. He is joined here by Karine and John. The nostalgia theme appears again in the traditional song Jamie Raeburn, where here the reason for leaving Scotland is transportation. Martin Simpson guests.

One of Ewan’s own compositions deals with the plight of the Chilean miners, the title implying that hope was always there in spite of the odds. His other composition on the album is the strikingly poignant John Glenton - Glenton was a soldier court-martialled and imprisoned after refusing to complete a second tour of Afghanistan. Another song which calls for social justice is Banks of Marble, written in 1949, but still relevant in these times when bankers’ bonuses are very much in the news. The title track deals with the reality behind unemployment statistics.

Ewan evidently takes his singing seriously - the songs are never trite, and always have something significant to say. Likewise his guitar playing is not merely an accompaniment to the songs, but an integral part of each performance, being more like a duet of voice and instrument. His prowess as a guitarist comes to the fore in the two tune sets of course: Reeling & Staggering; Napoleon Crossing the Alps and The Lass of Aughrim; Ae Fond Kiss, the latter marking a contemplative end to a well constructed album.

A treat for Bright Young Folk users, take a listen to ’Banks of Marble’ from Ewan McLennan’s new album ’The Last Bird to Sing.’ Featuring John McCusker on violin.